Uses of Exculpatory Clauses in Wills and Trusts 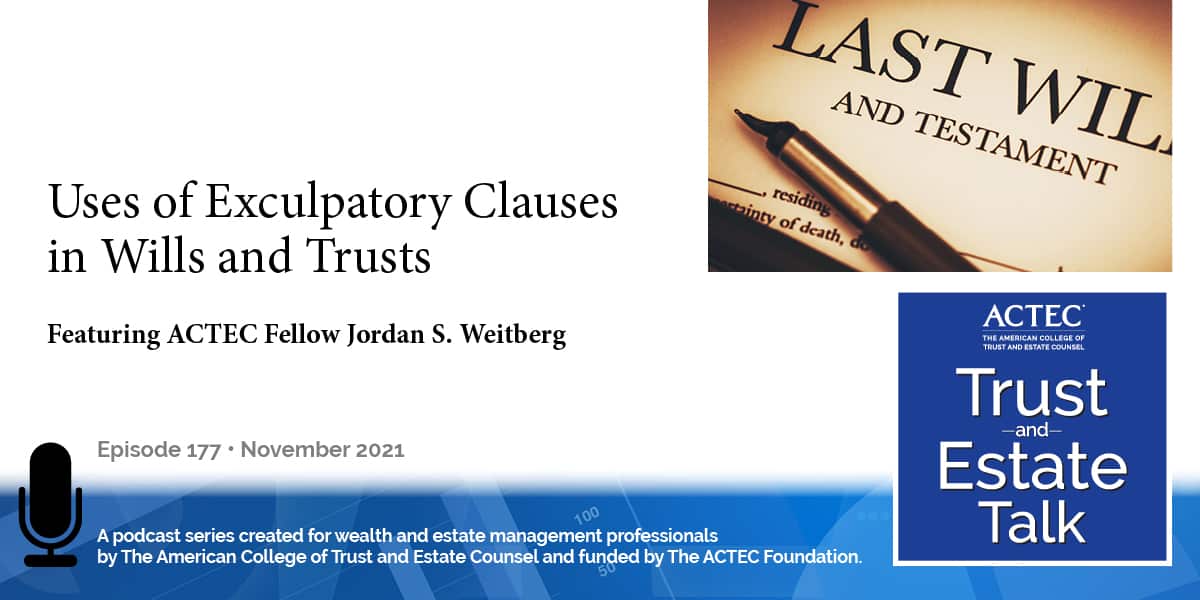 “Uses of Exculpatory Clauses in Wills and Trusts,” that’s the subject of today’s ACTEC Trust and Estate Talk.

This is Travis Hayes, ACTEC Fellow from Naples, Florida. Today, we will hear about the enforceability of exculpatory clauses in estate planning documents, standards under state law regarding the enforceability of those clauses, the use of exculpatory clauses when the scrivener is the one being indemnified, the use of retention clauses dealing with the duty to diversify, and advice for litigators in cases dealing with exculpatory clauses. To discuss these topics, today you’ll be hearing from ACTEC Fellow Jordan Weitberg, from New York, New York. Welcome, Jordon.

What is an Exculpatory Clause?

Thank you, Travis. So, first of all, what is an exculpatory clause? It’s a clause in a will or trust designed to relieve a trustee from liability for certain breaches of fiduciary duty that otherwise might give rise to a surcharge. And why do we use them? Well, the main reason is to make an inducement to convince an individual to act as a trustee. To me, that’s an interesting rationale, as it’s my belief that most scriveners hardly ever have discussions with their clients about the clauses being included in the documents, and they certainly rarely have the discussion with the trustees.

The exculpatory limitation is mandatory under the UTC. That means that the limitation cannot be eliminated by a provision in the trust instrument. In general, under common law, an exculpatory clause is strictly construed by the courts. So, around 35 states or so, maybe a little more, a little less, have adopted the UTC and have adopted these provisions with the standard bad faith or reckless indifference. A lot of other states, maybe all the rest of the states, have exculpatory clause provisions. I’ve looked at a few of these.

New York has a very rigorous standard. Under New York law it’s against public policy to exonerate a fiduciary for liability for failure to exercise reasonable care, diligence, and prudence. Essentially, the same standard that guides a trustee in the general performance of fiduciary duty.

In Delaware, in contrast, another state that doesn’t use the UTC standard, the law is much less rigorous. In Delaware, there is no exculpation for trustees. There may not be an exculpation clause that purports to relieve a trustee for liability caused by the trustee’s own willful misconduct. So, in other words, the clause is enforceable except in somewhat extreme situations.

What makes the exculpatory clauses tricky is that the language that lawyers use in drafting the clauses doesn’t necessarily match the standards contained in state law. For example, if your exculpation clause purports to relieve the trustee of liability except in cases of wilful default, or willful misconduct, standards that you see in some of the cases, would that cause be enforceable under a UTC provision or under your state’s own law?

It’s my recommendation that if your draft, including exculpatory clauses in wills and trusts, you should know the law of the state which is governing the instrument in question and make sure that the standard in your exculpatory clause matches the law in that particular state. It’s better to have the clause match the law than leave the issue to a judge. And there are a number of cases where the judges try to construe exculpatory clauses in view of contrary language or a different language that’s contained in the state law. So, match the clauses to what’s under state law.

Okay, now, we’re going to look at another rule that you’ll find in the UTC, which is exculpatory clauses that are drafted by an attorney who becomes the trustee. So, under the UTC, there’s a special rule that says where a clause is drafted by the trustee or caused to be drafted by the trustee, then the trustee has the burden to prove that the clause is fair under the circumstances and its existence in contents were adequately communicated to the testator. And if you fail to satisfy that standard, the clause will be treated as an abuse of a fiduciary or confidential relationship. Obviously, this type of rule is derived from the fact that we, as lawyers, represent the settlor and not our own interest if we’re the ones named as trustee.

The comments of the UTC says that this standard can be satisfied if the settlor or testator is represented by independent counsel. So, how would this disclosure of the existence and the contents of the clause be proven? Is a consultation or discussion with your client enough? What about a discussion with your client and a memo to the file? Sometimes lawyers prepare memos to the file reflecting what happened during meetings. What about a memo explaining the provisions of the trust in general that you may provide to a client when you present an initial draft of a document?

An example, the difficulty in proving the explaining the existence in the content is the 1991 Massachusetts case of Marsman v. Nasca that’s cited in the UTC comment in Section 1008. Now, this case involved the interpretation of an exculpatory clause where the attorney who prepared the trust was the trustee. The court found that the trustee’s conduct on its face was protected by the exculpation clause because there was no willful neglect or default on the part of the trustee. And that was the standard that was contained in the clause.

The court also found that the clause itself was enforceable under the state law standard in 1991. But the court held the attorney to a higher standard that there can’t be overreaching or abuse of the relationship by the attorney trustee.

So, what did the attorney do? The attorney testified in the trial that he discussed the exculpatory clause with his client and that she wanted it included. Sounds like he met his burden of proof, right? Well, that’s not what the judge found. The judge found that one cannot know at this point in time whether or not the attorney specifically called this provision to the client’s attention.

So, that’s a lesson to be learned. Do not rely on your notes. Do not rely on your memory. My recommendation is if you’re acting as trustee of a trust you prepared for a client and you want to include an exculpatory clause, prepare a form for your client to sign, acknowledging that you explained the existence and contents of the exculpation clause and that the client requests that the clause be contained in the trust instrument.

Okay. Exculpation clauses can also be used for the purpose of absolving a trustee from the duty to diversify a portfolio. These are sometimes called retention clauses. There’s a lot of cases in our jurisprudence about retention clauses. Usually, these clauses are added to a trust where a settlor or testator has a particular connection to an investment or a business.

So, in the cases, what you’ll find is the question is not so much whether the clauses are enforceable. In the cases I’ve reviewed, all the clauses have been held to be enforceable. The issue is how the clauses are to be construed in a given situation. The testator’s intentions are always paramount. You’ll find in cases the clauses, they say, the trustee “shall retain the stock” or “shall retain the business” under all circumstances. In those cases, the clauses will be enforced and will trump the duty to diversify and allow a concentrated position, and the courts will allow a concentrated position in the stock and the portfolio.

Trust Litigation with a Trust that Contains an Exculpatory Clause

Last point I want to cover is if you are involved in a trust litigation of a trust that contains an exculpatory clause, consider that clause in terms of the claimant’s burden of proof. Don’t overlook the clause in defending the trustee in litigation. Now, this is a matter of state law so you have to look at the law of your particular state. But there are cases where the clause is used not just as a shield to protect the trustee from liability but as a sword by the trustee to enhance the burden of proof that is required on the part of the plaintiff. This is something that can be very helpful under the circumstances.

In other words, if the plaintiff normally has to show probable cause to prove his cause of action with an exculpatory clause, the enhanced burden may include not just probably cause but also would have to take into account the fact that the trustee is shielded from liability except if there was bad faith, reckless indifference, or some other standard. So, that is something that should be considered by all litigators representing trustees and trusts with exculpatory clauses.

And so that wraps up my comments and I thank you for your time in listening.

Thank you, Jordan, for discussing issues involving the use of exculpatory clauses in wills and trusts.