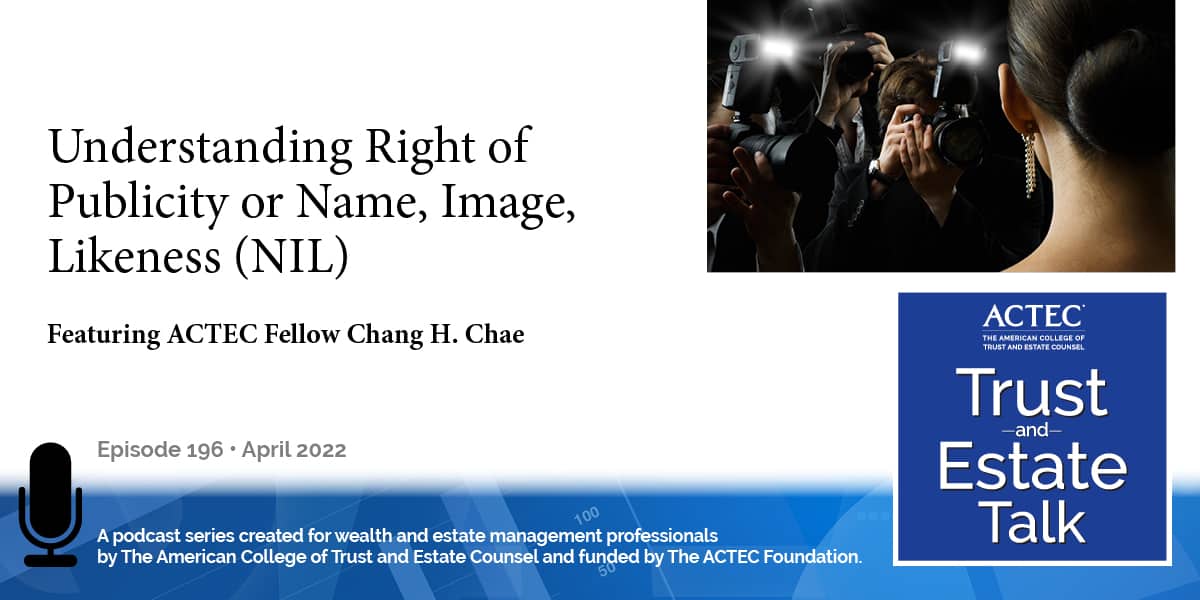 This is Travis Hayes, ACTEC Fellow from Naples, Florida. What are rights of publicity and how do various states treat these property rights? Today you will be hearing from ACTEC Fellow Chang Chae from Los Angeles, California. Welcome to Chang.

Thank you, Travis. The right of publicity, which really involves the name, image, and likeness has become more important these days, especially when you’re dealing with celebrity or famous clients. The right of publicity is really the right to control the commercial use of the name, likeness, and image (NIL). Right of publicity recognizes an independent right to protect economic interests from unauthorized commercial appropriation of celebrities’ personas. And this came from Judge Jerome Frank in the famous Topps Chewing Gum case.

State Variation in Recognition and Protection

Because of this view that the right of publicity is a property right, in many states this right is freely transferable and descendible. On the other hand, right of privacy essentially dies with the death of the celebrity. In my research, at last count, upwards of 36 states currently recognize the right of publicity, 25 of them recognize a post-mortem right of publicity and some of the notable states include California, Florida, Hawaii, Illinois, Indiana, Kentucky, Massachusetts, Nebraska, Nevada, New York, Ohio, Oklahoma, Rhode Island, Tennessee, Texas, Utah, Virginia, and Washington.

As most other rights protected by the various states, there are variances in how the right of publicity is enforced in these states. For example, Utah requires the celebrity to have commercially exploited his or her name and likeness during his or her lifetime in order for the right of publicity to be descendible. Utah may be the only state that requires this condition precedent.

In terms of the protected attributes, they, again, vary among the various states. For example, in California, beneficiary’s heirs have the right to control the exploitation of a deceased personality’s name, voice, signature, photograph, or likeness. New York, which recently enacted their post-mortem right of publicity, limits their right to the personality’s name, portrait, picture, or voice. In Indiana, the rights include- among those that I indicated previously with California- include distinctive appearance, mannerisms, and gestures. So, one of the famous personalities from Indiana, David Letterman, you can see how perhaps his mannerisms would be protected in Indiana.

State Variation in Duration and Enforcement

Another area in which the states vary in their right of publicity statutes is the duration of the enforcement. In Washington, they have two separate time periods; one involving just ordinary individuals which is 10 years after the death of the individual. But if the individual’s name and likeness had a commercial value, then that right extends to 75 years, what they call personality. In New York, the right is enforced for 40 years after the death of the celebrity. In Indiana and Oklahoma, which may be the longest, it’s 100 years. In Tennessee, the right is enforced indefinitely so long as the estate continually exploits the celebrity’s attributes.

The last area I’m going to talk about in terms of the distinction among the states is sort of the nexus to that particular state for enforcement of the statute. In California, it requires the deceased celebrity to have been a California resident. In New York, the celebrity must have been domiciled in New York. Indiana requires only that the act or event occurred within Indiana regardless of the celebrity’s domicile or residence; except they do have one caveat and that is unless the person died intestate without surviving heirs, in which you could not apply the Indiana statute.

Washington, Hawaii, and Nevada have sort of broad statutes which doesn’t require the celebrity to have been a resident or been domiciled in that state. However, there’s a case in Washington involving Jimmy Hendrix where the court ruled that applying the broad Washington statute, regardless of domicile, was considered to be arbitrary and unconstitutional. And so, the question becomes whether you’re able to apply these broad statute in these states if you can overcome it, but in order to do so, you would have to overcome the argument that the statute may itself be unconstitutional.

So, one last thing I wanted to talk about is in terms of protecting the publicity rights. What I mean by that is what do estate planners do, in terms of, with these rights. If the celebrity wants to be able to vest the control in a single individual to exploit the name and likeness. For example, many celebrities will have a business manager or an entertainment lawyer doing the exploitation and they may want him or her to continue to do so. In which case they would likely have to create a name and likeness type trust to hold those rights so that that individual can continue to exploit those rights for the benefit of the celebrity’s beneficiaries.

If there isn’t such a specific provision, then the name and likeness rights pass under the residuary provisions of the will or trust. And if the person had died intestate, then the rights to pass to their statutory heirs.

Thank you, Chang, for discussing rights of publicity and the variances amongst the states.

You may also be interested in Estate Planning for Entertainment Clients.