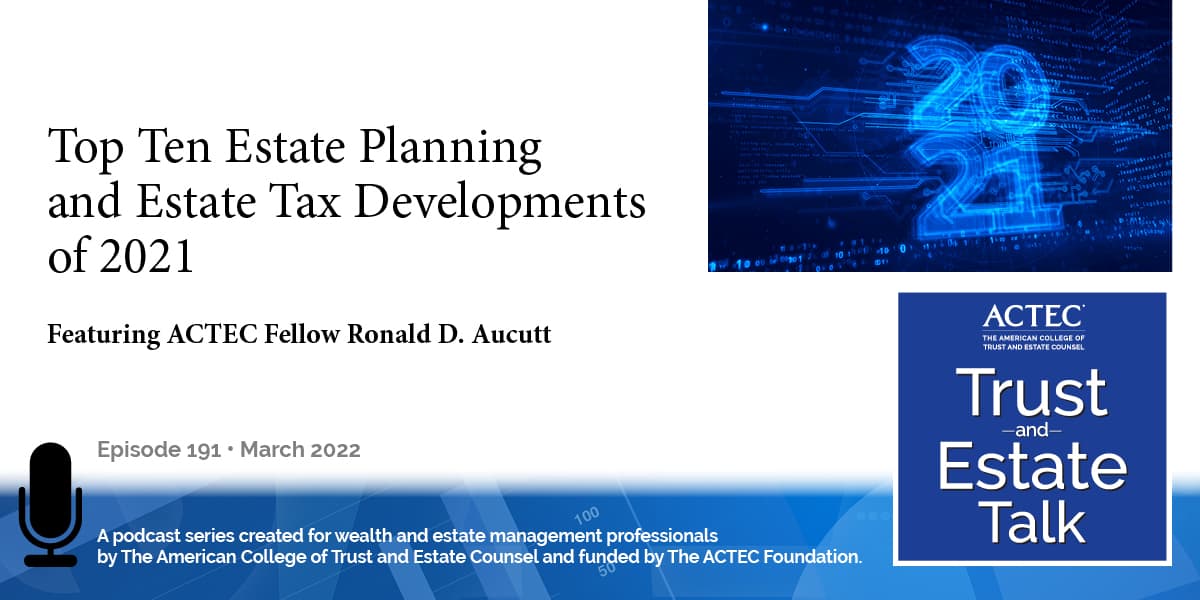 This is Natalie Perry, ACTEC Fellow from Chicago, Illinois. ACTEC Fellow and Past President, Ronald Aucutt shares his commentary, Capital Letters, on ACTEC’s website. Today we are honored to have him join us and discuss some of the key points in Capital Letter No. 55, Top Ten Estate Tax Planning and Estate Tax Developments of 2021. Welcome Ron.

Every year for the last 12 years, I have compiled a list of what I call the Top Ten Estate Planning and Estate Tax Developments of the Year. Not because those are the only developments or the only order that might be selected, but just to have a way of talking about the year. Here is a summary of the Top Ten of 2021, which as Natalie said are described in more detail in Capital Letter No. 55 on the ACTEC website.

Number Ten is the regulations issued in October, providing that the IRS will issue an estate tax closing letter if the executor pays a user fee of $67. I think the user fee is silly and not very well justified. But it’s a small price to pay to end the suspense about closing letters we have had since 2015, assuming of course that in 2022 the IRS can improve its response times.

Number Nine is the Tax Court decision in Estate of Morrissette, dealing with the estate tax treatment of intergenerational split-dollar life insurance – in other words, insurance Clara Morrissette paid for on the lives of her sons. The court largely respected the form of the arrangements in a legitimate operating business context, and therefore upheld the family’s gift tax treatment. But the court determined an estate tax value that was higher than the family had advocated.

Number Eight is the United States Supreme Court’s refusal to review the enforcement of a John Doe summons directed to a law firm in Taylor Lohmeyer v. United States. A client of the firm had underreported, by about $5 million, his income from foreign accounts that the law firm had helped him create, and the IRS asked the firm for information regarding any other clients the firm had helped to set up foreign entities or accounts. There were about 32,000 documents involved. The law firm will be able to claim attorney-client privilege on a document-by-document basis, but the burden obviously could be huge.

Number Seven is the Tax Court opinion in the Estate of Michael Jackson. The issues were the values of Michael Jackson’s image and likeness, which had suffered from his bizarre behavior for many years before his death, and two bankruptcy trusts heavily burdened with debts attributed in part to that same behavior. The court determined values higher than the estate had reported but much lower than the IRS had proposed. Even though Jackson’s works became very profitable after his death, the court was very careful to follow precedent and not let value be affected by either speculation or hindsight.

Number Six is two cases from a federal district court in California – Fairbairn and Pinkert. In both cases, the court turned down the request of the donor of a Donor Advised Fund to second-guess the conduct of the fund sponsor – in one case the sale of donated publicly traded stock and in the other case the selection of an affiliate to manage investments. An encouraging takeaway is that the decisions upheld the principle of section 170(f)(18)(B) that the donor must give up title and control of the donated property. But a somewhat ominous takeaway is that the court seemed willing to allow the challenges if a donor had proved that the sponsor had made and broken specific promises.

Number Five is two Tax Court cases involving variations of splitting and combining gifts and bequests of LLC interests. The case of Smaldino involved gifts of LLC interests to a dynasty trust for Mr. Smaldino’s descendants – one gift made directly by him and another gift “purportedly” (as the court said) made by his wife of interests he had given her the day before. The court treated it as a single gift made directly by Mr. Smaldino, and thus the use of Mrs. Smaldino’s unified credit was lost. The takeaway is to carefully monitor transactions between spouses. And the case of Estate of Warne involved interests in an LLC 100% owned by the decedent, bequeathed 75% to a family foundation and 25% to a church. The court applied discounts to those two bequests, resulting in charitable deductions that did not fully offset the value of the LLC included in the gross estate. The takeaway is to try to consolidate charitable bequests, perhaps, in facts like Warne, by making one bequest to the foundation which then, but without prearrangement – could give 25% to the church.

Number Four is a sampling of proposed changes to the federal tax law that made us so anxious in 2021. A lot was written and said about “aligning” the income tax and transfer tax treatment of trusts, ignoring grantor trust status, valuing assets held in an entity like a partnership or LLC on a “look-through” basis as if they were not in an entity at all, and treating gifts and transfers at death as realization events. Each of these ideas presents challenges of complexity, unfairness (for example, for family businesses), awkwardness of trying to reflect far-reaching policies in piecemeal bites, and for some proposals the prospect of coping with vastly different parallel tax regimes (for example, for new trusts and for preexisting trusts) going forward for generations. Although unlikely to be brought back in 2022, these proposals could be revived in the future by the right combination of political pressures, policy concerns, and fiscal needs.

Number Three is a reminder in the 2021-2022 Treasury-IRS Priority Guidance Plan, published in September, that when Treasury and the IRS finalized the “anti-clawback” regulations in 2019, they “reserved” (as they said) an addition to the regulations they described as an “anti-abuse provision” to prevent the general “anti-clawback” rules from inadvertently overriding provisions like section 2036. That makes sense because Congress has intended for nearly a century to “claw back” certain gifts into the gross estate with rules like section 2036. The big takeaway for us is that, although this addition to the regulations will likely apply prospectively to the inclusion in the gross estates only of persons who die in the future, it will probably apply to the inclusion of gifts made since 2018 if those gifts, for example, trigger section 2036 or 2038 or similar clawback provisions in chapter 14.

Number Two is the approval by the House of Representatives in November of a significant increase in the income taxation of certain high-income taxpayers. For trusts and estates, a 5% so-called “surcharge” would be imposed on what in effect is essentially taxable income above $200,000, increasing to 8% over $500,000. Unlike the proposed structural changes I mentioned earlier, a “surcharge,” which is basically just a rate increase, would not be very complicated. For that reason it may be one of the most likely of the proposed income tax changes to survive if and when any of the 2021 “Build Back Better” proposals are revived.

And Number One is the COVID pandemic, continuing to force changes in the way we live, practice law, and advise clients. Many of these changes will be permanent to some extent. Some of these changes will be good, like the greater interaction among professionals in different offices on virtual platforms or the greater opportunities to balance work with commitments to families, especially families with young children, by working more effectively from home. But other long-term COVID effects may make it harder to train and be trained, to mentor and be mentored, to understand clients’ needs and objectives, and to give understandable and effective advice. Eye-contact and body language are important. This was also Development Number One in 2020, when many of us viewed it as a short-term crisis. A year later, it has continued. Astonishing. Unprecedented. Number One.

That’s it, I appreciate your attention.

Thank you, Ron. If you are interested in reading this or other Capital Letters commentary from Ron, please visit actec.org/professionals/capital-letters.