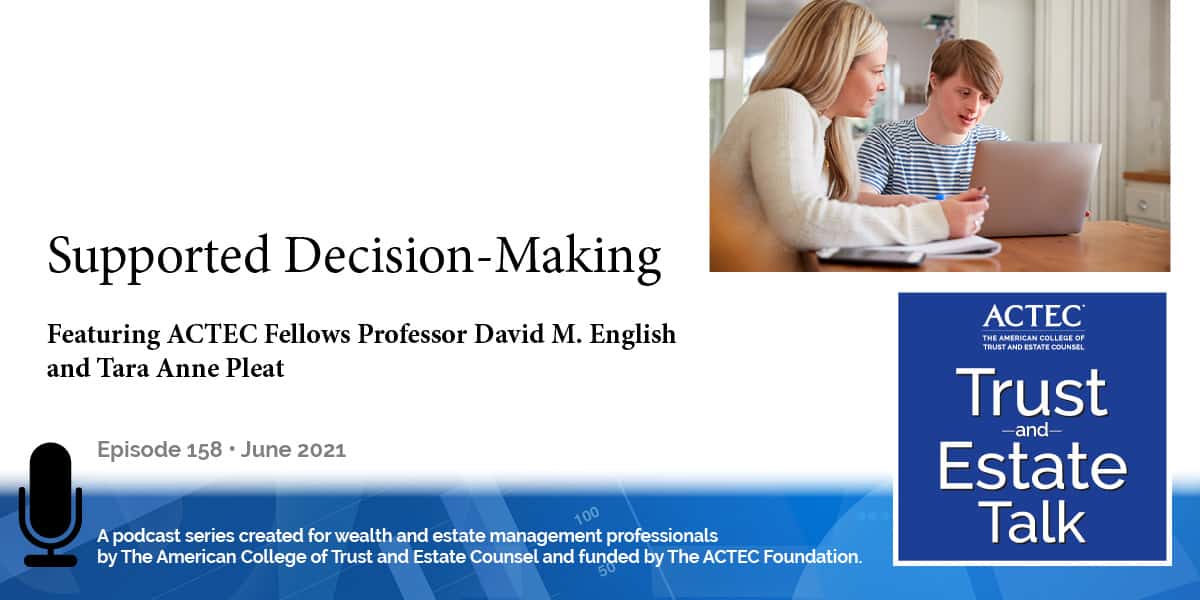 This is Jean Gordon Carter, an ACTEC Fellow from Raleigh, North Carolina. Supported decision-making is a promising alternative to guardianship. Now, we have two experts who are going to talk with us about this topic. You’ll be hearing today from ACTEC Fellows Professor David English of Columbia, Missouri and Tara Pleat of Clifton Park, New York. Welcome Tara and David.

What is Supported Decision-Making?

Supported decision-making arrangements can be informal, or oftentimes, they’re formally signed documents where the various parties agree on what role they will play. But the key role of a supported decision-making agreement is that the individual with a disability will continue to make decisions for themselves but will do so with some assistance. Why is supported decision-making being talked about so much recently in the US? Among the reasons is the UN Convention on Rights of Persons with Disabilities (CRPD), which was approved in 2006 and has been approved by over 180 countries in the world.

Supported Decision-Making in the US

The US has not ratified the UN Convention, but it’s had an influence in the US. And the UN Convention requires that the countries that have agreed to the Convention provide support to people with disabilities to enable them to exercise their legal capacity. So, the US hasn’t ratified the Convention, but it’s been very influential in the US. Among the other reasons is the work of the Department of Health and Human Services – its Administration for Community Living, which is the division of HHS, has been a strong advocate for supported decision-making. Most importantly, for the public, to my mind, the Administration for Community Living has funded a national resource center.

Many states are working on the concept of supported decision-making. It has been today more successful among groups working with individuals with developmental or intellectual disability. But it may hold promise as well for older individuals of declining capacity. So, that’s my introduction. But now Tara will talk about the situation in New York.

The most significant was that some of the existing legislation was not based on any actual evidence of how supported decision-making would work and for which population or populations it would work. There were some questions about the consistency and capacity, some questions about the rigidity of these agreements that David referenced and what they can look like and who can provide support and what kind of support can be accessed by an individual who’s looking to have this kind of arrangement put into place.

In New York State, in particular, we have a two-tier guardianship system; one of which is for individuals who have intellectual and developmental disabilities, which were in place prior to the individual attaining the age of 18. And our guardianship statute, as it relates to that population is overly broad, has been subject to constitutional challenge in New York State. And so, as a result of the constitutional challenges that were brought, there was some movement by New York’s Developmental Disabilities Planning Council. And they, back in 2015, issued a request for proposal for a five-year supported decision-making pilot program grant.

Our approach in New York was a facilitation model for two groups of individuals with intellectual and developmental disabilities. The first was what they called a diversion pilot, which would offer supported decision-making to those at risk of guardianship – away from guardianship – to divert them away from it and to educate individuals and their families about supported decision-making as an alternative and how it would work as well as other alternatives to guardianship, which depending upon the capacity level of the individual at hand, might be a discussion of powers of attorney or health care directives of some type.

The other type of facilitation model was a restoration pilot, which would offer supported decision-making to those who already were the subject of guardianship orders with the aim to restore their decision-making rights by terminating guardianships. And that was handled in large part with oversight and support from an organization known as Disability Rights New York, which is the protection and advocacy organization for individuals with disabilities here in our state, to address the need here and really to focus on process. Again, this pilot project was to develop and see how it would work with the intellectual and developmental disability population. What they did was they developed a three-stage process. And it was based on other pilots and research that they had done around the world. The organization, I should say, for anybody who’s interested in looking at it is Supported Decision-making New York. It’s sdmny.org. And through that five-year program they had an advisory committee, which I had the good fortune of being able to sit on and watch the pilot develop. And as we worked through it, we worked into three phases, which we originally were hoping that this three-phase facilitation process would take six to nine months, but in reality found that it was taking twelve to eighteen.

The first phase was where a facilitator would work with the decision-maker – the individual with disability who is going to be at the center – and the person seeking support, and learn. It was the facilitator’s job to learn how the decision-maker would communicate, make decisions, what kinds of decisions were likely to arise in the short and long term, and who were the important people in the decision-maker’s life that that person might choose as their supporter.

In the second phase, the facilitators would work with the supporters, the people chosen, and the decision-maker, educating them about supported decision-making in concept and helping them reposition their thinking and reposition the rules that they might have otherwise had up to that point, especially in the context of a parent. From being people who make decisions for the individual with the disability to really supporting them and allowing them to make their own decisions, including those that might be risky. We spent a lot of time in New York talking about the concept of dignity of risk.

And we have a very paternalistic guardianship system, where there is a goal to keep folks safe, understandably so, but not necessarily giving any credence to what those individuals may want to be doing or trying. So, we spent some time focusing on that dignity of risk concept. And lastly, in the third phase, the facilitator worked with the decision-maker and the decision-maker’s supporters to negotiate an agreement. So, in New York in our pilot project, we did come to a formalized agreement that would ensure that all the parties understood their roles, their obligations, and their responsibilities.

At the close of that phase, we would prepare a draft of the agreement that would be reviewed and modified and then ultimately signed by the decision-maker, their supporters, and the facilitator. We closed out our pilot at the end of 2020. And of course, the 2020 year didn’t go as anybody had expected. But we were still able to proceed with facilitating agreements through virtual means. Where we are now in New York is, our Office for Persons with Developmental Disabilities has drafted a statute. It’s yet to be introduced. It’s being shopped to legislators locally. But that statute really is focusing on the process and trying to mandate that that process is utilized.

In New York, again, right now our focus is on the intellectual and developmental disability population. But in the opening language of our statute, there is a very clear directive that the expectation is, once this is in place and it works, that the intention will be for other pilots to take place in New York State to see how this process will work for the senior and elder population as well as those who have mental health-related disabilities or traumatic brain injury. And that’s where we are in New York.

So, the hope is we’ll see an introduction of this bill in this legislative session. We’re already almost halfway through it. So, it remains to be seen if that will happen in 2021. But we continue to move forward, as many other states around the country are.

That is a fascinating new development. Thank you, Tara and David for your insights on supported decision-making.

For additional resources to share with your clients visit the ACTEC Family Estate Planning Guide videos Supported Decision-Making and Alternatives to Guardianship.