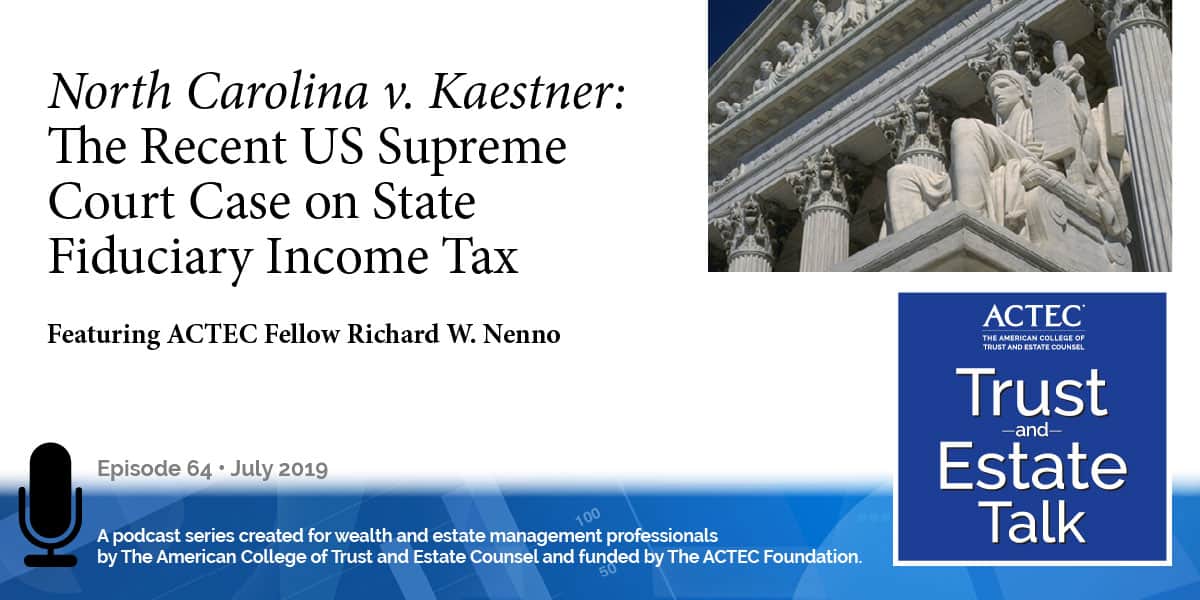 This is Margaret Van Houten, ACTEC Fellow from Des Moines, Iowa. Just last week the US Supreme Court ruled on a case involving issues of state fiduciary income tax in a case called North Carolina Department of Revenue v. Kaestner. To hear more about this case and the Supreme Court’s ruling, you will be hearing today from ACTEC Fellow, Dick Nenno of Wilmington, Delaware. Welcome, Dick.

Thank you, Margaret. Hello, everyone. As Margaret indicated, I will be talking about the Kaestner decision. The citation for it is 2019 Westlaw 2552488. It was decided on June 21st of this year. And, in determining whether the trustee of a trust has to pay a states’ income tax, you really have to resist the impulse to look at the governing law clause in the Will or trust, because that is rarely relevant for the state income taxation of trusts. What you have to do is find out how a state defines resident trust in its statutes, its tax regulations, or its fiduciary income tax regulation, or instructions. And, the states really fall into five categories. Over half the states tax a trust if it was created by the Will of a resident or domiciliary. Almost as many states tax a trustee if the trust was created by a resident or domiciliary trustor.

About 15 states tax a trust that is administered in the state. About that number of states tax if you have a resident trustee or fiduciary, and a handful of states, actually a small handful of states, tax a trustee if a trust has resident beneficiaries. The Kaestner case focused on that last category, taxing exclusively if you have resident beneficiaries. I should note though, that my compilation about how all 50 states and the District of Columbia tax trustees is on the ACTEC website (Bases of State Income Taxation of Nongrantor Trusts for 2018, which is www.actec.org. So, the facts of the Kaestner case were pretty straightforward — that a New York City resident set up a trust for his children in 1992. In 1997, Ms. Kaestner moved to North Carolina. A few years later, the trustee divided the trust into shares for the trustor’s three children, and in 2005 to 2008 the trust paid about 1.3 million dollars of North Carolina income tax, even though in those years the only contact was that the beneficiary and her children were North Carolina residents.

The trustee was a Connecticut resident, the books and records were kept in New York, the custodian was in Massachusetts. And in the decision, as I say, that was decided on June 21st, the Supreme Court decided unanimously that North Carolina could not tax the income of this trust under the Due Process clause of the 14th Amendment. The decision was very limiting. The court was careful and it was Justice Sotomayor who wrote the opinion. The court was careful to issue a very limited decision that it only applied to a case like this, where the trustee had complete discretion, the beneficiary had no ability to compel distributions and no distributions actually were made. The North Carolina statute in question really says that North Carolina attempts to tax trustees, resident and non-residents, who are managing trust for the funds for the benefit of North Carolina residents. And, as I say, the court in this instance found that it would violate the due process clause for North Carolina to tax in these circumstances.

Now, the implications of all of this, first of all, the Kaestner decision has no impact on planning in some big states and California is a good example. California will tax a trustee, first of all, if you have a resident fiduciary. So, if you do not have a resident trustee or advisor or other fiduciary, then California won’t tax on that basis. California taxes though, if you have non-contingent beneficiaries, which is different from the Kaestner case, where you had only contingent beneficiaries. And, in California, if you have a trust without a California fiduciary and there is no non-contingent beneficiary, then there will be no California tax. And, on a 1 million-dollar long-term capital gain incurred in 2018, you can save over 100,000 dollars of California tax. So, real saving is involved. Planning can continue in New Jersey, New York and Oregon, where the rules for escaping tax are straightforward and you really, if you are not planning to avoid those state taxes, I think you are really asking for trouble.

Also, there are a few states that say in their tax return instructions, or even in their statute, that the residence of beneficiaries is irrelevant in determining whether a trust is a resident trust. And those states are Connecticut, Iowa, Nebraska and Pennsylvania. And the significance of all of this, of course, is if the trust is classified as a resident trust, then the trustee is going to be taxed on all of the accumulated ordinary income and capital gains. If it is a non-resident trust, for the most part, the trustee is only going to be taxed on source income, that is income attributable to real property, tangible personal property or business activity in the state.

The states that are definitely affected by the Kaestner decision and I think clears up some planning opportunities are, of course, North Carolina; Georgia has a statute that is almost identical to North Carolina’s, so I think that planning is now clearer in Georgia, and the third state is Tennessee. Tennessee’s Hall Income Tax though, only applies to interest in dividends; it doesn’t extend to capital gains. And, the Hall Income Tax is scheduled to sunset at the end of next year, but they are the three states that are most affected by this decision. Now, I mentioned earlier that the court really tried to issue a very narrow decision, but I will at least suggest other areas that might be affected, that there are several states that use the residence of beneficiaries as a criterion along with other factors. And, I think that, if nothing else, the Kaestner decision undermines the significance of resident beneficiaries. Those states are Alabama, Connecticut, Michigan, Missouri, Montana, North Dakota and Ohio, and a few states offer a deduction if there are non-resident beneficiaries. I think it is nice that those states offer the deduction for non-resident beneficiaries, but again, whether you have resident or non-resident beneficiaries, in my mind, should be irrelevant in determining whether it is constitutional for a state to tax a trust. Those states that have the non-resident beneficiary deduction are Delaware, Maryland, Massachusetts and Rhode Island.

And finally, another case from Minnesota, the tax department in Minnesota had filed a petition for certiorari to the US Supreme Court, which actually was denied just in the past day or so. But, it is the Fielding case, and there again, the Minnesota courts had held that it would violate the due process clause for Minnesota to tax a trust that was created by a Minnesota trustor – four trusts, one for each of his children. One of the children was a Minnesota resident. The Minnesota court said it had found that the beneficiary’s residence was a factor to consider, but found that that was, even though it is not in the statute, but the court found that and other factors were not enough to justify taxation. So even though the US Supreme Court has denied cert, I think the impact of having resident beneficiaries in states like Minnesota, states that tax if you have resident testators or trustors, I do not think the residence of the beneficiary really is as strong as it might have been before the Kaestner decision. And with that, I would just encourage listeners to continue to plan to minimize state income tax. You can really benefit your clients, and if you are not doing it, I think you might very well be facing malpractice or surcharge actions.

Thank you, Dick, for educating us on this important Supreme Court case.

Taxes Emerging in Europe to Pay the Cost of COVID

“Taxes Emerging in Europe to Pay the Costs of COVID,” that’s the subject of today’s ACTEC Trust and Estate Talk. Transcript/Show Notes This is Doug Stanley, ACTEC Fellow from St. Louis, Missouri. During the COVID pandemic in many jurisdictions in Europe, there had...

END_OF_DOCUMENT_TOKEN_TO_BE_REPLACED

Co-chair of the ULC’s Cohabitants Economic Remedies Act Committee explains the importance of having laws concerning the economic rights of unmarried cohabitants.

END_OF_DOCUMENT_TOKEN_TO_BE_REPLACED

An overview of Self-Settled Spendthrift Trust statutes of limitations and review of Wyoming’s legislation, House Bill 64.