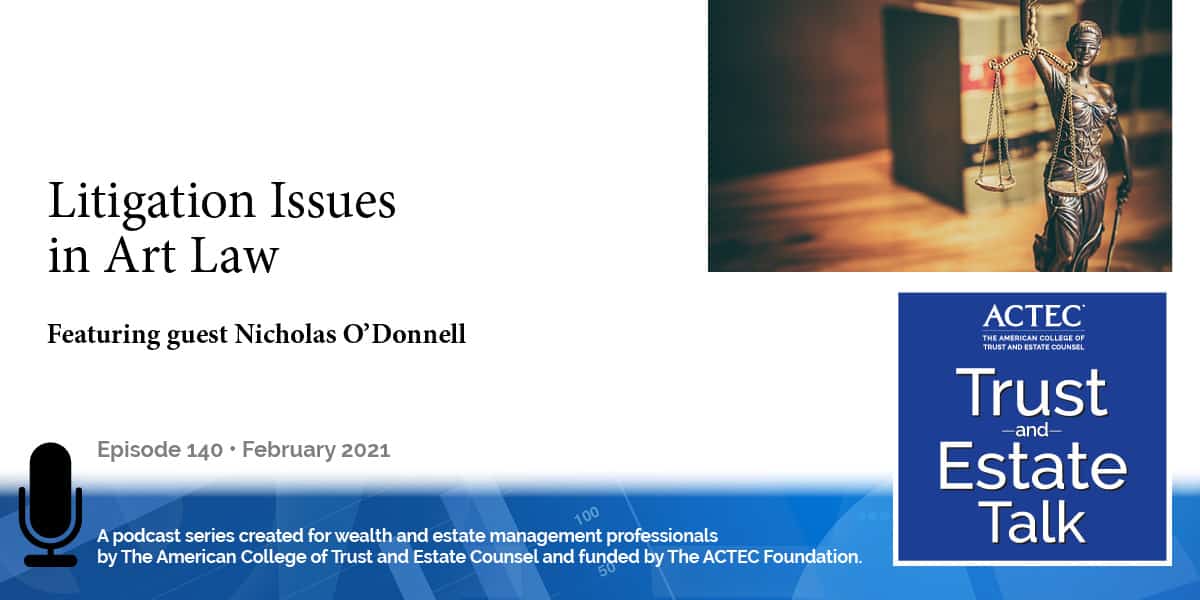 This is Susan Snyder, ACTEC Fellow from Chicago. The issue of the provenance of an artwork is of great concern in the area of art law. To learn more about this topic, you’ll be hearing today from our guest, Nicholas O’Donnell of Sullivan & Worcester in Boston. Welcome, Nicholas.

Thank you. In this segment, I want to talk about a few tips that dealers, buyers, and collectors can use to determine their provenance risk exposure and what, if any, litigation concerns they need to be thinking about. Provenance is just a fancy word for saying who has owned an object in the past. And one area, in particular, that has become hotly contested in the last 20 or 30 years is dealing with objects that were displaced during World War II, and the Nazi era more generally. I want to give folks a few shorthand tips they can use to spot any issues, and hopefully to wade their way through them.

Artwork Displaced by World War II and the Nazis

The first thing – when you’re dealing with a work of art and figuring out if you have any of these concerns – is to start to triangulate where it’s been and in what period of time. So, if the work of art has been in the United States since 1920 and you can establish that from its provenance, you don’t really have any further inquiry to worry about in this regard. The challenge comes when you realize that someone owned it prior to 1945 and that person was in Europe, and more specifically that person was in Europe in a place that, at some point, was controlled or invaded by the Nazis.

So here, what you want to do is start to narrow down, between 1933 and 1945, any locations or owners that were in a place that was affected by that. So, if it was in Germany in 1934, you have to ask some more questions. If it was in France in 1934 and then came to the United States in 1935, then you don’t have to worry about it, because that’s same sort of thing as the work from 1920 that I talked about. And what you then want to do, and you don’t need to do this all on your own, is to start to go through the sequence of owners and check them for any potential exposure. Now, here’s the good news because this is a lot easier than it used to be. There are databases; the most prominent among them is the Art Loss Register. But there are also databases run by the German government – an organization called Artive, where, if you see a collector’s name in an affected area, you can check them to see if they made – there’s a record of a collection that’s been affected or looted and more specifically, perhaps a work of art, if it’s been affected or looted. If you determine that you have a work where it intersects with a collection or a person, then you need to determine where you got it and what was publicly known about it.

One thing that happens, with some frequency, is a work will come out of a collection or an estate in modern times and the descendants or the executors will learn for the first time that something had moved around in Europe in a period of time that is a problem. What I will say is there isn’t always an easy answer for this, but it will depend in a large part on how you come to learn this. The major auction houses, in particular, Sotheby’s and Christie’s, have very helpful restitution departments and professionals that have done a lot of creative solutions when things are trying to be sold, to bridge the gap between buyer and seller. And the fact is, each of these cases and the history of each of these objects presents a very different path; and whether you have an object that is at risk of the title falling through in a way you didn’t expect, depends obviously on how and what path it followed. And the best thing you can do is to talk to someone or talk it through, to figure out whether any of those transfers are a concern. Because one thing that also happened a great deal is affected objects were returned to their original owners who then, of course, were free to buy and sell them. So, the mere fact that you’ve determined that an object may have changed hands in a way that is a problem, does not mean that you have a problem. And it’s important to walk through those questions.

Thank you, Nicholas, for educating us on the issues surrounding provenance of older artworks.

You may also be interested in Estate Planning with Art.