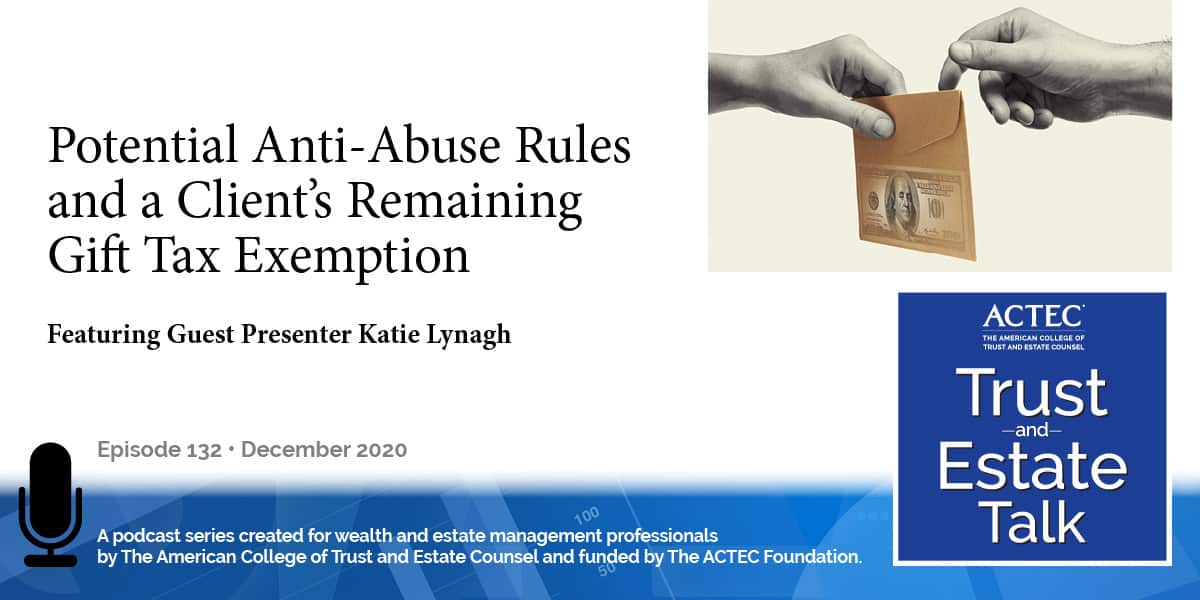 This is Susan Snyder, ACTEC Fellow from Chicago. The gift and estate tax exemption amount is at a historically high level. This high amount is set to expire in 2025, and there are concerns that date will be moved up by Congress, and Treasury may issue anti-abuse rules in this area. To educate us more on this topic you will be hearing today from our guest, Katie Lynagh of Milbank in New York City. Welcome, Katie.

To understand these potential anti-abuse rules, we have to first go into a little bit of the mechanics of how the estate tax computations work. As I’ve mentioned in the introduction, as part of the Tax Cuts and Jobs Act, which took effect in 2018, the exemption amount was doubled from 5 million to 10 million. Both those amounts are unadjusted for inflation. And the law also provided that this 5 million of so called “bonus exclusion” is only available until the end of 2025. So, one of the first questions that trusts and estates practitioners had when this law was passed was, how will the estate tax computation procedures work in the event that someone uses this exclusion amount before 2026, but then dies in 2026 or later after the exemption amount has gone back down to its original level? So for example, what would happen if a client’s only gift is a 10 million gift in 2020 and he dies in 2026, and the exemption amount is 5 million again? The reason for worry here is that when calculating the estate tax that’s owed by an estate, lifetime gifts are added back into the estate tax base. Then credits are given for gift tax pay or payable and for the exemption amount as of the date of death. And it would certainly be an undesirable result if 10 million of gifts were included in that estate tax base, but the estate only had a 5 million exclusion amount to use against that 10 million in gift.

So, Congress directed Treasury to create regulations to address this. The so called “final anti-clawback regulations” provide that ‘if that exemption amount that applies to the decedent’s lifetime gifts exceeds the amount that’s available at the time of death, then the estate can use the higher exemption amount that applies to the decedent’s lifetime gift.’ And as a result, if we go back to our example from before, that person who makes the 10 million gift in 2020, will be able to shield his entire 10 million gift from estate tax even if he dies in 2026 or later.

So, turning now to today’s topic. In the preamble to those final regulations, Treasury reserved for what it called “anti-abuse rules” that would essentially prevent the bonus exemption amount from being used on certain types of gifts. And these potential anti-abuse rules originate from comments that the New York State Bar Association Tax Section submitted to Treasury in response to the proposed anti-clawback regulations.

In the comments that they brought to Treasury’s attention, that people would be able to make potentially painless taxable gifts that lock in the bonus exclusion amount, even in cases where they’re retaining beneficial access to the gifted property. I’ll go into specific examples in a minute. But looking at the bigger picture, we’re in a situation now where the exemption amount has been doubled, but only if you use it before it expires at the end of 2025. So, some clients will simply make a gift of 10 million and they won’t miss the money. For many others, they might not be comfortable making a gift of that size right now, unless they have some way of potentially accessing that gift of property in the future. And those are the types of gifts that the anti-abuse rules would likely target. So, with that as our background, I want to cover the three most important key points that you should know about the potential anti-abuse rules.

Gifts Targeted by the Anti-Abuse Rules

So, the first key point is, what types of gifts will be targeted by the potential anti-abuse rules? This is, of course, speculative because rules haven’t been released yet. But according to the preamble to the final anti-clawback regulations, the anti-abuse rules could target gifts that are pulled back into the donor’s gross estate at death and/or gifts that are artificially increased due to the application of the Chapter 14 – Special Valuation Rules.

And I’ll highlight a few examples of gifts that were specifically mentioned by the New York State Bar Association Tax Section in its comments, and by Treasury in a preamble to the final anti-clawback regulation. So again, a common theme here is that these are gifts that use up gift and estate tax exemption but that allow the donor continued access to the gifted property. The final regulations provide that ‘transfers subject to a retained life estate or other retained powers or interest could potentially be targeted by the anti-abuse rules.’ So, these gifts are sometimes referred to as artificial gifts because while they result in a taxable gift that could use up the donor’s exclusion amount, they are still included in the gross estate because the donor retains an interest or control.

So, the example that the New York State Bar Association Tax Section used in its comments is a Grantor Retained Income Trust or GRIT. With a GRIT, a donor retains income interest in the trust assets for a specified period of time. If the remainder beneficiary is someone like the donor’s spouse or certain family members and if that interest that’s retained by the donor isn’t a qualified interest, as defined in the Chapter 14 – Special Valuation Rules, the interest that’s retained by the donor is valued at zero and the taxable gift amount is equal to the total value of the property that was transferred to that GRIT. And at the donor’s death, all the trust property is included in the donor’s gross estate.

Another type of gift that is likely to be targeted by the anti-abuse rule is a gift of interest in a preferred partnership that doesn’t comply with Section 2701. And this is also sometimes referred to as an intentionally busted partnership or a defective preferred partnership or probably several other names as well. So, the strategy here is that the donor transfers property to a partnership that has two classes of interest, the preferred interest and a common. The preferred interest is designed so that it doesn’t qualify for exceptions to the Section 2701 – Valuation Rules. For example, preferred interest could have a noncumulative distribution preference. The donor then gifts the common interest to a trust for his decedents. The gift tax value of that common interest will be determined using a subtraction method, under which applicable retained interests are valued at zero. So, the result is that there’s an artificially high valuation of that gifted common interest.

For example, let’s say the donor transferred 10 million to the partnership. The common interest could really be worth 1 million, for example, but since the preferred interest is valued at zero, under the subtraction method, the gift tax value of the gift of the common interest will be 10 million. At the donor’s death, the estate tax base includes preferred interest, which is in the gross estate, and his lifetime gifts, which will include that artificially inflated 10 million gift. There is a special mitigation rule that prevents double taxation of the preferred interest, and this mitigation rule was really a key part of the strategy working; and it’s quite possible that the mitigation rule could be revised as part of the anti-abuse rules. So, I’ve highlighted two strategies that could be targeted by the anti-abuse rules. But it’s important to understand that Treasury has broad authority here and it’s possible that these anti-abuse rules would go much further and impact other types of gifts as well.

The Effective Date of Anti-Abuse Rules

The second key point I want to give you is that some people have asked, if the anti-abuse rules do come to pass, what would be the effective date of these rules? So, the concept of having an effective date is really a misnomer. The anti-clawback regulations and any anti-abuse rules that would be added to them are regulations that are interpreting the statute that computes the estate tax obligation of the decedent.

So, an estate tax calculates its estate tax obligation based on the estate tax computation procedures that are in effect at the time of the death of the decedent. So, the anti-abuse rules should apply to the estate of anyone who dies after a final anti-abuse regulation is issued. So, just to be really clear, there shouldn’t be any expectation that if someone makes a gift that uses the bonus exemption amount prior to the anti-abuse rules being issued, that that gift would somehow be grandfathered in or otherwise exempt from these potential rules.

And the third key point I want to make is, just to take this risk of potential anti-abuse rule seriously. We don’t know for sure what Treasury will focus on in the future and if it will follow through with issuing potential anti-abuse regulation. We also don’t know what Congress and/or the President will prioritize going forward. So, there is ample uncertainty here, but that shouldn’t cause us to ignore or discount the impact of these potential anti-abuse regulations. Although the ultimate outcome isn’t certain, we’ve been duly warned of these potential regulations, and that warning came from a Republican administration. So, we know that a Republican administration is interested in these anti-abuse rules. We also know that Democrats have a stated policy goal of increasing taxes on the very wealthy, via gift and estate taxes. And given the federal government’s massive coronavirus release expenditures, there is definitely going to be pressure in the coming years to increase revenues.

Thank you, Katie, for this very helpful information on a complicated topic.