Migrating a Law Firm’s Software and Data to the Cloud 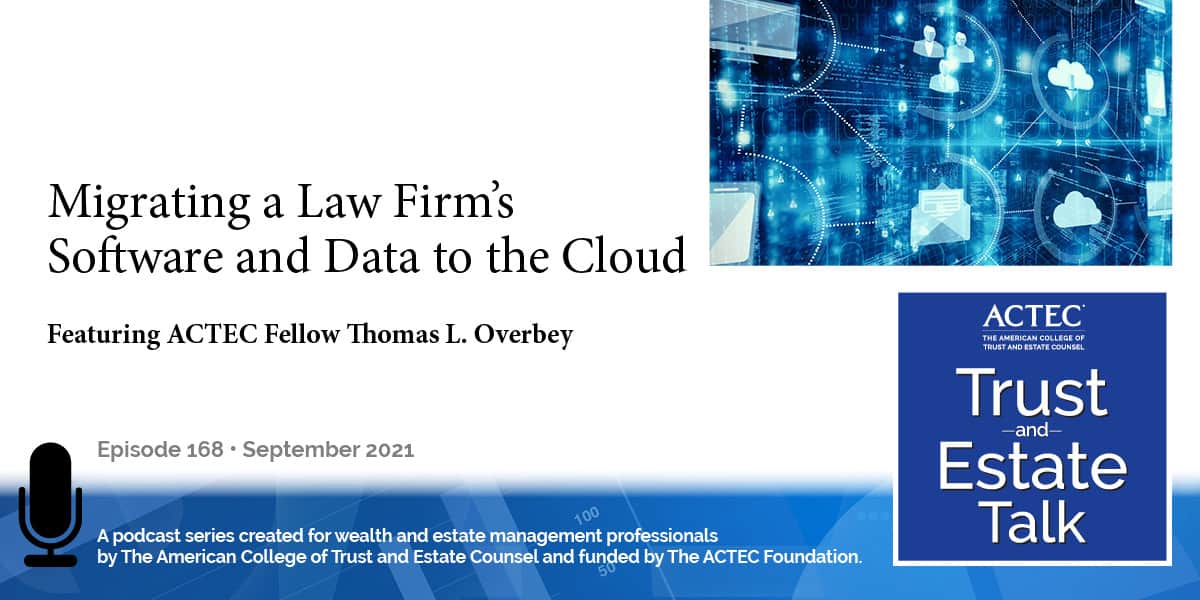 “Migrating a Law Firm’s Software and Data to the Cloud,” that’s the subject of today’s ACTEC Trust and Estate Talk.

This is Susan Snyder, ACTEC Fellow from Chicago. Many firms should be considering whether to keep their physical server or move it to the cloud. On today’s podcast, ACTEC Fellow Tom Overbey of Fayetteville, Arkansas, shares his experience with moving his firm to a cloud server and offers recommendations for firms looking to make this change. Welcome, Tom.

Thank you, Susan. Appreciate the intro. First thing I want to say is that the subject of today’s podcast was covered in three successive meetings of the Technology in the Practice Committee in the fall of 2020 and in March 2021 and then the June 2021 summer meeting. The first topic was “Nuts and Bolts – Where Should Your Server Sleep at Night?” The second topic was “Moving Your Firm’s Server to the Cloud.” And the last one was “Landing in the Cloud.”

Documents referred to in this presentation:

Considerations When Moving Your Law Firm’s Server to the Cloud

The first question is should you move your physical server to the cloud? The answer to that, to me- and I think most folks that have looked at it- is pretty much absolutely, yes. If your physical server is a year or two or three old, you may want to run out a little longer. But you sure don’t want to wait to the point that your physical server crashes and burns, and you’ve got 24 hours to make a decision as to what to do. You can’t move to the cloud that quickly. So, think ahead. Look at your timing. And when you or your IT advisors tell you that it’s time to think about what you’re going to do with your existing server, go look at the cloud.

Most people have misperceptions about it. It’s really no big deal. Think about your law firm moving from your office you’re in now to an office in another building. You can envision that. You understand the issues. Moving your server is very similar, it’s just that you’re not packing and loading desks. You’re having a physical server be shut down and a new server in the cloud, which is really another physical server. It’s just on somebody else’s equipment, located somewhere else in the world, not in your office. There’s a lot of issues. There’s reasons to do it. Security, you don’t have to have a locked server room. You don’t have to worry about your server breaking down, because it’s their server and they’ve got all this backup stuff and multiple machines. And it’s much better for you long-range to have your server off in an environment that you can’t afford unless you’re a really, really, really big law firm. Small law firms, and by that I mean 50 or less, really have trouble affording all the things that the cloud providers can make available to you. Some of them have cost analysis on their websites, not all, but some, where you can feed in your numbers, what you’re paying now for your software, and other things that are on your physical server, and you can evaluate the costs.

But I will tell you that unless you make bad assumptions, it’s pretty much a wash. If you look realistically what you’re paying for a physical server, for the local IT providers that take care of it, your subscription costs for your software, your internet costs, your firewall costs, and all this other stuff, and then look at what you pay for cloud service, over a useful life of a server, it’s going to be a wash. Now, you can monkey with the numbers and make it look better or worse, but that’s the reality. And some things will be the same. What you’re paying for your software is going to be the same because you’ll want the same software on your cloud that you have in your office.

The next part leads into part two of my prior presentations. And that is, where do you get these IT services? Well, it’s a national market. You’re not dependent on the IT firm in your town or even in your state. It’s a national deal, and there are cloud providers that are national in scope. Some specialize in law firms, and that’s the direction you ought to go because they’re going to be more attuned to what you need.

Steps for Moving IT Services to Cloud

Next subject is, how do you figure out what to do? To me, solo and small firms, if you’re small, if you’re two people maybe three, you can think about no server at all. It’s covered in my material, so I’m not going to spend time on it today. But once you get past three people, you’ve pretty well got to have a server to properly do things, particularly with staff.

So, what is the advantage of being in the cloud in that respect? IT management. You’ve got – Instead of somebody, a partner, or a staff member, spending a lot of time answering internal IT questions and worrying about stuff, you basically put it off to a help desk on the cloud provider’s website and anybody in the firm, at that point, once you’re in the cloud, can post a help desk request and get their thing taken care of. Think of what that does in terms of reducing time spent by some lawyer or lawyers and some staff or staff members who are now trying to mother all this for everybody in the firm.

One of the things you need to do is compile a complete software list before you start and a hardware list. And be very detailed, because to get a real answer from a potential cloud provider, they need to know what you really look like. And if you can’t communicate that, they can’t give you a real answer as to how things are going to look if you move to their service.

We had a list of about eight we culled down to the three, but many people are doing this and doing a good job. And you ought to consider anyone that appeals to you, but do look for someone who focuses on a national basis and preferably law firms.

Migrating Server to the Cloud

Then your last element is, once you’ve gone through the analysis, you’ve decided you need to go to the cloud. You’ve interviewed and selected a cloud provider. Then you have to land in the cloud. And how does that work? Well, they all have these migration and transfer steps that takes about eight weeks. They’ll send you all that stuff. You look through it. You then look a lot harder at the information you previously supplied. You’re going to look very hard at your licenses for your software, et cetera. You’ll provide that to them. They’ll look at it. They’ll come plug into your current server, and then they’ll tell you what you missed. And didn’t tell them or didn’t have, and you’ll supplement. And that’s the first couple of weeks of the process.

You’ll have to have all the usernames and passwords for your server, every program, all the phone numbers, everybody’s emails, everybody’s passwords, on and on and on, to move what you’ve been living with to a new location. Again, it’s like moving your office. You’ve got to go think of where, if you were moving your physical office, you’d say, “where’s my office going to be in the new space?” It’s the same thing on a server basis.

They will then build and prep your site. They’ll gather data. They’ll hook you into your server, as I said. They’ll send you a drive to plug into your current physical server or servers, and they’ll start downloading data to get it all ready to go. And then, you get to a cut-over date when they’re ready and they got you your site built and you’re ready to go. Now, on cut-over day, at about four o’clock in the afternoon, they’re going to do the final transition from your server to that portable drive, which you will then overnight to them and they will load up the next morning. So, from the cut-over point at four o’clock on that afternoon, until they’re up and running the next day at some time, your server is shut down and you don’t have what the server provides. So, you’ve got to think about how to operate without your physical server. You can do phone calls, you can do meetings, but you can’t access stuff.

The next day, they’ll get it all up and running. They’ll start calling each of you during the day and put you up on your part of the cloud, and you’re operational. They’ll link in your printers, your scanners, everything you’ve got. There’ll be a little transition but basically, you’re up and running at that point. Their tech support, as I mentioned has a help desk; that’s really great.

There are a couple of things you got to learn to live with, and that is files outside the cloud. If you want to go to a courtroom proceeding and you want certain client files, you’ll have to download them from your cloud down on your local drive so that when you’re inside the courtroom and you might not have internet access or Wi-Fi, you can access those files. That doesn’t happen often. It’s easily done, et cetera. You can’t run Zoom meetings through the cloud. They don’t allow that for purposes of security and loads.

So, there are hiccups and things that you’ll learn to deal with when you’re in the cloud that are maybe a little different from where you are now, but all in all, it’s a good deal. We’re very happy with our transition. I know several ACTEC fellows who have firms who have talked to me about their transitions. Not one of them has complained that they’re unhappy they did it; all been a good thing. So, take a look at the materials, think about it, and good luck.

Very interesting. Thank you, Tom, for these very practical tips on migrating your law firm to a cloud server.