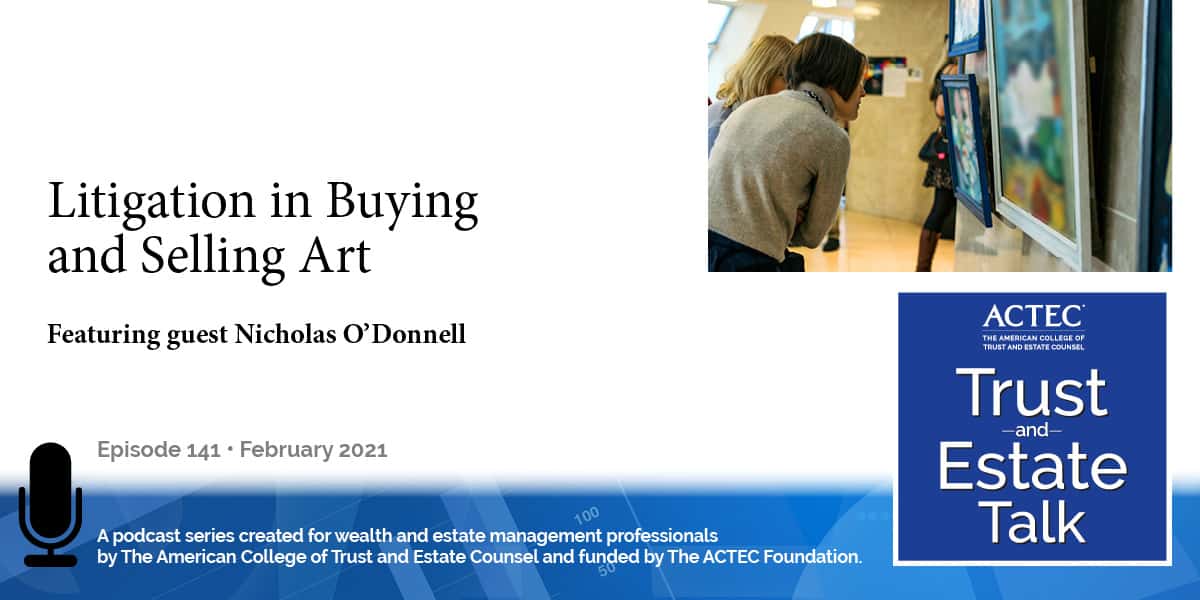 This is Doug Stanley, ACTEC Fellow from St. Louis, Missouri. Are you mindful of the terms of the transaction you are entering? Have you done your due diligence regarding the authenticity of the art? Do you know who the dealer is working for? To tell us more, you will be hearing today from guest, Nicholas O’Donnell of Sullivan & Worcester in Boston. Welcome, Nicholas!

Thank you very much. I want to talk today about a few issues that can arise and cause some litigation or present the risk of litigation, when we’re talking about buying and selling of art. And these happened at the point of sale and after.

First question to remember, when you or your clients are thinking about buying and selling art, is the terms of the deal that the seller and the consignee, gallery or the auction house, is proposing. That is to say, if you have a work of art, and you’re taking it somewhere else to sell, what are the rules of the road there? As you may know, as you will discover, the art world operates in a very informal way and that can cause a lot of problems because exactly what the expectations are on a handshake deal can really go sideways quickly. It’s important to remember that if you’re consigning art in New York and you or your client is the artist or the artist’s successor in interest, that imposes some extra duties – a fiduciary duty on the consignee, on the gallery, or the auction house that’s selling it. And you need to be aware of that, and you need to understand that if you have any disagreement with the seller about that, that you have those rights.

Likewise, you should have a consignment agreement; it’s always a good idea. It doesn’t have to be complicated. Because when you don’t, these rights get muddied up and it’s not clear what everybody was expecting. Other states, like Massachusetts for example, have different consignment laws that have a broader set of duties on the seller, like I was describing in New York, and in Massachusetts, for example. The seller doesn’t have to be the artist. As long as it’s a consigner, those fiduciary duties are going to arise and you’re going to have those rights to enforce them.

One of the other major issues that comes up in the context of buying and selling art is the question of authenticity. What is the object and how do we know whether it is what the seller believes it to be? If you’re representing collectors with objects that have been in their family for a long time, you may be presented with a story that is firmly believed about where the object came from and how they came to have it. And you need to understand that the market is not always going to accept those stories at face value. So the question becomes, what is it that you have to document where you believe the objects came from? I talked in another one of my talks about risks that can create with regard to Nazi looted art (Litigation Issues in Art Law). But fundamentally, the question the market wants to know is, how reliably can we believe that a particular artist made this particular object? There are lots of resources for this. You should have on your team, consultants who can help you with this. That does not have to be a broad and expensive process. But if you’re bringing an object to market, you may be surprised and may be unhappy with what you learn.

Likewise, if you’re a buyer, you need to look with care at what the authenticity and the provenance is saying about where this object came from. You do not want to find yourself in a situation like this shake out from the Knoedler Gallery scandal, where the various parties were arguing about whose job it was to be diligent on the front end of the transaction. If you have done your best and it turns out something was not what you expected, you’re going to be in a much stronger position to say that the risk of loss should fall to the other party and not to you.

And that brings me to my final point, which is, in the course of working with dealers, consultants and all of the various actors that operate in the art market, of which there are many, you need to be mindful of who’s working for whom.

One of the better known stories of the last several years is about the Swiss advisor Yves Bouvier and a Russian collector named Dimitry Rybolovlev, who have had a very public and very bitter dispute about who was working for whom and whether Bouvier was a consultant who owed Rybolovlev his loyalty, or his own independent dealer who was free to buy and sell on his own account. And I won’t weigh in on that dispute, but the point is, it can get very messy and very unpleasant. And one the lessons of the last, I’d say, 5 to 10 years in particular is, collectors need to be smart and need to protect themselves with written agency agreements. They don’t, again, have to be terribly complicated about what the expectations are of who was acting for whom.

I’ll just sum up by saying, like I said as I began, there is a lot of pressure in buying and selling art – to be discreet, to be informal – and there are a lot of reasons that the market has come to be that way. But if you rely on informality, you’re exposing yourself and your client to a lot of risks that can be avoided, and given the value of the property involved, it really is best practice to avoid when you can. Thank you very much.

Thank you, Nicholas, for your presentation.

You may also be interested in Estate Planning with Art and Litigation Issues in Art Law.