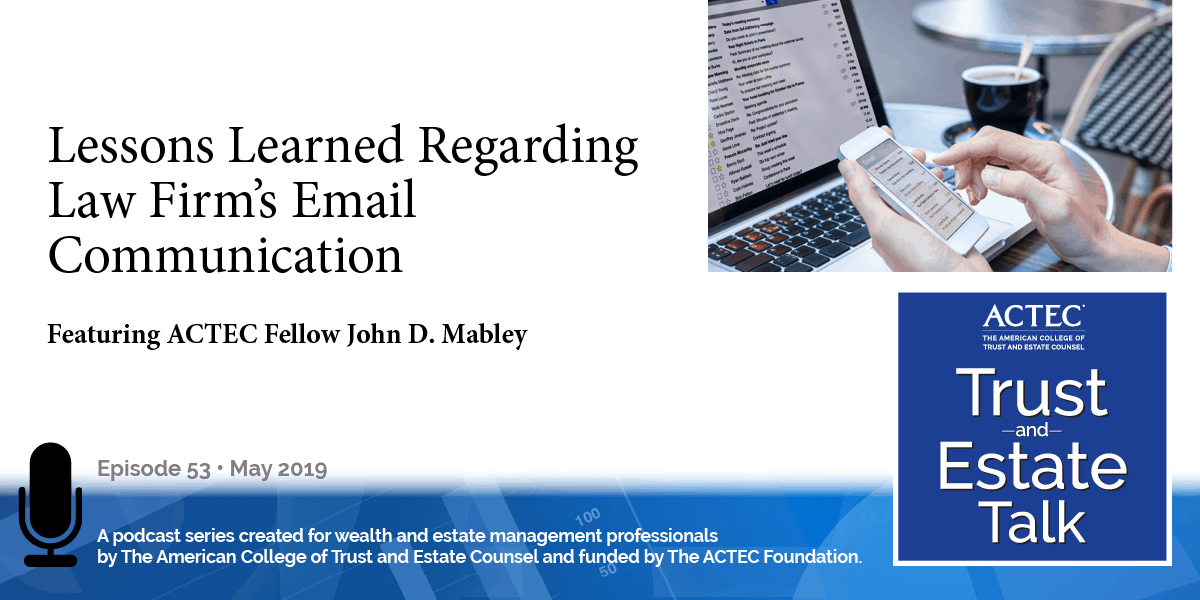 This is Kathy Sherby, ACTEC Fellow from St. Louis. We’re going to be talking today about what happens when a court email of an order goes into the law firm’s spam filter. To discuss this case involving this issue in more detail, you’ll be hearing today from ACTEC Fellow John Mabley of Southfield, Michigan. Welcome, John.

Thank you. This is an interesting case on what can really go wrong with technology in a law firm when attorneys don’t pay attention to new technology. What this case involved was an eminent domain case that was tried in 2011-2012 in Florida and ultimately ended up getting appealed to the First District Florida Court of Appeals.

The claim on appeal was that the trial court abused discretion in not vacating an order assessing substantial attorney fees against the appellant. Apparently, at the end of the eminent domain trial, there was a motion made in January of 2013 for attorney fees based on what occurred in the trial. At the end of the motion in January, the court requested that the parties submit proposed orders, and that was the last that happened until March of 2014, approximately 14 months later, when the trial court finally issued its own order assessing substantial attorney fees against the appellants in the case. The appellant’s counsel, then in May of 2012 [sic: should be May of 2014], filed a motion to request that the court vacate the order that it had entered March of 2014. The problem was that this motion was beyond the appeal period for appealing the court’s order, and the court sustained its order and denied the motion to vacate. So the case went up on appeal to the Court of Appeals, and at the Court of Appeals’ level it was developed the testimony that occurred during the motion to vacate the order came out, and it’s obvious from the discussion in the Court of Appeals case that this was a substantial amount of attorney fees that were involved given the number of witnesses that were called during this motion to vacate the order.

The Court of Appeals first noted that the IT Director for the trial court was called first, and what they had to do was to verify that when the trial court entered its decision on the motion, the motion was served by email in accordance with the e-filing procedure of the trial court. It had to be first determined that the clerk of the trial court properly emailed out the order. And so the IT Director for the trial court was called; he indicated that he reviewed the court’s email log, and it showed that the email was sent out properly to the addresses that were furnished by counsel and no error code or response was received showing any problems with the transmission. In essence, he indicated had there been a problem, the court would have received an error code and would have known that the order was not delivered.

The next person that was called in the case was the former IT consultant for the appellant law firm, who was hired in 2011, and he stated that in 2011 the firm had installed a new Microsoft Exchange Server with a built-in email filtering system. At that time, the IT consultant indicated that a decision had been made by the appellant firm to configure the system to permanently drop and delete the email that the system perceived to be spam. So it made it so the system made its own decision and automatically deleted this out of the system without providing any log or other entry. No email log was set to be maintained under the new system, and the consultant testified that he advised the firm against this configuration due to the fact the filtering system that was employed was unreliable and there was a risk of deleting legitimate emails. He recommended that a third party be retained to handle spam filtering, but the firm rejected that recommendation on the basis of cost so no separate handling of spam filtering was done. He also recommended in 2015 that the firm use an online back-up system for its server to create logs for emails, this was also rejected on the basis of cost. At that point, the consultant testified that he quit because the firm did not accept his recommendation. He also opined that the clerk email was probably deleted as spam when received by the appellant law firm.

The next person apparently that was called was an information system consultant, who reviewed both the clerk’s email log and also the appellant law firm computers. That consultant testified he found no issue with the clerk’s transmission and, having checked all five of the law firm computers, could find no evidence of receipt or destruction of any court email. He noted that the law firm system was not configured to create an email log, which would have documented receipt or non-receipt of the clerk email. He finally testified that if the firm had set up a log he could have determined what happened. And he did confirm, however, that the law firm’s computers had shown that they received other emails from the clerk’s office of the trial court. Finally, an email consultant was called who confirmed that the law firm did not properly implement and utilize email filtering systems.

That was not even enough- because the final witness in the case, according to the Court of Appeals’ record, was the lead counsel for the appellee law firm. Bear in mind that this case, the original case for sanctions, had attorney fees had been submitted in January and the court’s decision did not come out for 14 months. Lead counsel for appellee indicated that his firm had a protocol in place where a paralegal would check the electronic court docket on pending motions and orders every three weeks. After the January hearing, when nothing was coming out, he consulted -the appellee law firm consulted with the appellant counsel about filing a motion for a status conference to see what happened to the order. Appellant counsel refused to join in such as motion, basically a head in the sand situation.

Going through the Florida cases, the Court of Appeals indicated that the Florida courts do not have any authority to grant relief where neglect to file an appeal occurs entirely in the office of the attorney and is not based on any action of the court clerk. The Court of Appeals observed that the law requires due diligence on the part of a law firm, and diligence cannot be lightly presumed.

Based on the testimony, the Court of Appeals found that the trial court could properly conclude that excusable neglect did not occur under these facts because the law firm made a conscious decision to use a defective email system, and, in addition, failed to independently monitor the court docket in a way that would have detected the problem within the appeal period.

The takeaways that I see from this case – especially as we go forward with email and the developments in email scanning and apps – is that there are number of apps that are coming out now to handle email, and anyone who has gone to a time management program, or listened to podcasts on time management, knows that basically one of the first levels of advice starts with how to handle email. This is a continuing, developing area for attorneys to understand, and you need to understand limitations and issues regarding the handling of email and spam, or you need to hire a consultant who does and pay attention to their recommendations. As noted, under Comment 8 to the Model Rules of Professional Conduct, in order to be competent the attorney has to maintain knowledge and skill regarding the benefits and risks associated with relevant technology.

You really need to set up your practice in such a way that you maintain email folders and logs to deal with email and provide a second look at spam and possible spam. This is particularly important in connection with the developing world of e-discovery, and where things are not maintained you can run into problems in e-discovery situations if records have not been properly maintained or preserved. As courts continue to move to paperless e-filing procedures- and this includes probate courts- you’re going to have to keep up with the procedures of each court and determine how those courts are handling the service of their orders and how to monitor their cases as they proceed through the courts.

Note that court systems are not infallible and make mistakes as well, and I would just indicate to the listeners that I’ve had situations – and we have a fairly good email system – but I’ve had situations where I’ve tried to save an email, a client email, to a folder that I maintain for that client and it has, through some magical way, ended up in my spam filter as junk mail so I do go through that spam filter and junk mail each and every week just to be sure that nothing’s gotten into there that shouldn’t be there.

That basically is the take away from this case and the fact that you need to understand the technology that you’re using to be sure that you do not place your law firm, or your clients, into difficult situations. Thank you.

Thank you, John for discussing this very interesting case.