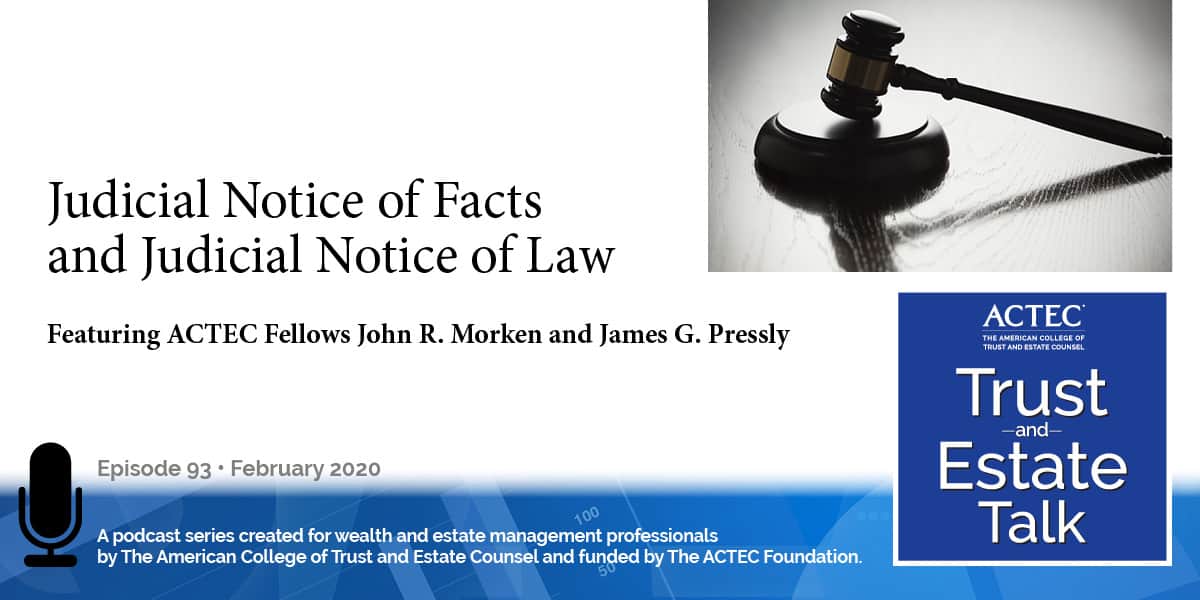 “Judicial Notice of Facts and Law,” that’s the subject of today’s ACTEC Trust and Estate Talk.

The ACTEC Evidence Subcommittee of the Fiduciary Litigation Committee has been studying various aspects of commonly encountered evidentiary issues. One of those is the subject of judicial notice, and our subcommittee member John Morken will cover that subject at this point.

Every state that I know of takes judicial notice of the law of the state, that state. You’re in a court in New York; it’s going to take judicial notice of the laws of New York. Other states, will it take judicial notice of those? In fact, in New York they will. Other states may not. You may have to go bring in some sort of other evidence or something to show what the law is in another state. Foreign jurisdictions, however, in New York, using that as an example, courts may not have to. It all depends on the circumstances, and the way the rule reads:  “if a party requested furnishes the court sufficient information to enable it to comply with the request and has given each adverse party notice of its intention to request it, then it will take judicial notice of a foreign law.” The key is what do the words “sufficient information” mean? I had a trial, estate of Thomas L. Messi (sp?) in Long Island, where the other side wanted the court to take judicial notice of Mexican law and we opposed my adversary’s interpretation of that. We had a two-day trial on what the Mexican law meant in order to even get to first base in the case. So, this can be a very problematic area that the litigant should be very wary of and watchful for to make sure it’s done right.

Judicial notice of facts is really, though, where the rubber meets the road in this area, and again, just using my jurisdiction; but it’s a good standard because it has pretty much followed the same principles that are followed elsewhere. A, a court may take judicial notice of facts provided. Now look at three things: facts of such common knowledge within the community where the court sits, they cannot reasonably be the subject of dispute, so there’s no issue; B, facts that are capable of accurate and ready determination by resort to sources whose accuracy cannot reasonably be questioned; and C, certain facts contain an undisputed records of a court, such as prior orders or kindred documents, which would – otherwise be inadmissible – not otherwise be inadmissible.

So, let’s take a look at that first one: facts of such common knowledge within the community where the court sits, that they cannot reasonably be the subject of dispute. So, here’s a story. I was having dinner with a friend of mine a few weeks ago and I told him I was giving this presentation and he said, “Huh, John, let me give you a judicial notice story. I got a call about 8:30 in the morning and this woman called and said, someone had died in Staten Island and the widow was panicking because the girlfriend was going through all of his effects and what could he – she had to stop it. She had to get something, a court order, something.” He said, “When did he…?”  “Last night, what am I supposed to do?” So, my friend Steve calls the court in Staten Island and says, “Jerry, I’m representing the widow of a guy who died last night; I need letters of administration. What can I do, because the girlfriend’s going through the effects?”  “Well, what’s his name?” “Frank Fresca.” “Oh Frankie, everybody’s talking about Frankie. He got gunned down last night at 1 o’clock in the morning outside his restaurant, took nine shots. It was an execution. It’s even in the Staten Island paper, we will take judicial notice of it. You’ll get letters of administration immediately.” By noon, he had letters of administration, put the stop on the widow (sic: girlfriend) immediately. Okay. That’s how we do it in New York. Of course, the real moral of the story is you’ve got to know the clerk. But okay, be that as it may, let’s move along.

Here’s another one. This is actually — we all know Josh Rubenstein — he’s a lawyer in New York. His grandfather was the Brooklyn Surrogate; this is 1951. He has an estate and he’s trying to distribute it to the intestate beneficiary, who’s a young man in China. But what’s going on in China in 1951? Well, Surrogate Rubenstein took judicial notice of what was going on in China 1951 and said, “Guess what? We’re going to hold this money in escrow until things get a little bit calmer in China, where we can deliver it.” (Matter of Wong Hoen’s Estate, 107 N.Y.S.2d 407, 409 (Kings County Surrogate 1951).) So that’s an example. Again, everybody knew that. These are undisputed facts.

Another good example, I think it comes out of New York, in a case that was also dealing with estates up in the Bronx. A will favors the nursing home in which the decedent lived. Uh-oh, that seems like it could be a little bit suspicious, and the court took judicial notice of how difficult it was at that time to get into nursing homes in the Bronx – judicial notice of those facts.

Now, but judicial notice, you’ve got to be a little bit careful of this because you get into areas whether it’s geography — now, geography — that really comes under the second–with facts that are capable of accurate and ready determination by resort to sources whose accuracy cannot reasonably be questioned. New York, effective January 1 of this year, new statute, Google Maps can now be utilized for geography. We can take judicial notice of what Google Maps says about certain places and where things are. That’s very new. Now, before you could have done that, perhaps by case law.  But now it’s a presumption. Now the other side can come in and say, in this particular instance, Google Maps blew it. They can do that, but still, it’s probably not going to be questioned. That being said, we want to be careful when we get into this area of science.

I want to read a case out of our U.S. Supreme Court 1900, Austin v. Tennessee. It was a criminal case involving tobacco, cigarettes. Let me quote this. This is how you can get it wrong, because you just don’t know enough. “From the first settlement of the colony of Virginia to the present day, tobacco has been one of the most profitable and important products of agriculture and commerce, and while its effects may be injurious to some, its extensive use over practically the entire globe is a remarkable tribute to its popularity and value. We are clearly of the opinion that it cannot be classed with diseased cattle or meat, decayed fruit or other articles, the use of which is a menace to the health of the entire community.” I’m not sure the U.S. Supreme Court would write an opinion saying that today. I mean, again, judicial notice mistakes can be made and when you get into the areas, I think particularly in our practice of trust and estates, where we’re talking about wills and capacity or we’re looking at the mental situation of a person, you have to be very careful as a litigant to make sure that the court does not take inappropriate judicial notice of certain things. I would much rather, as a litigant, by and large rely on expert testimony that can present things very clearly as to what is going on, and then of course, that also, on the other side, allows for appropriate cross-examination.

One last point, with regard to the standards we are talking about here, I pointed out that judicial notice would also be applied with regard to undisputed records of a court, such as prior orders of kindred documents, which would not otherwise be inadmissible. I can’t tell you how many times I’ve heard a court say, “Well, we’ll take judicial notice of our file.” And, I want to say, “Hold on, can I see that file; what’s in that file?” There may be things in that file that really should not be noticed by anybody. We have things called privilege. There may be privileged information in there that should not be part of the record. There may be inadmissible hearsay that should not be part of the record. So again, a word of warning to all of us, when you hear those words: I’ll take judicial notice of my court file, ask for an opportunity to review it very carefully and possibly object.

At the end of the day, judicial notice is a good rule of efficiency, but it is no substitute for just good presentation of the facts to the tribunal.

Thank you, John, for helping us understand more about judicial notice.