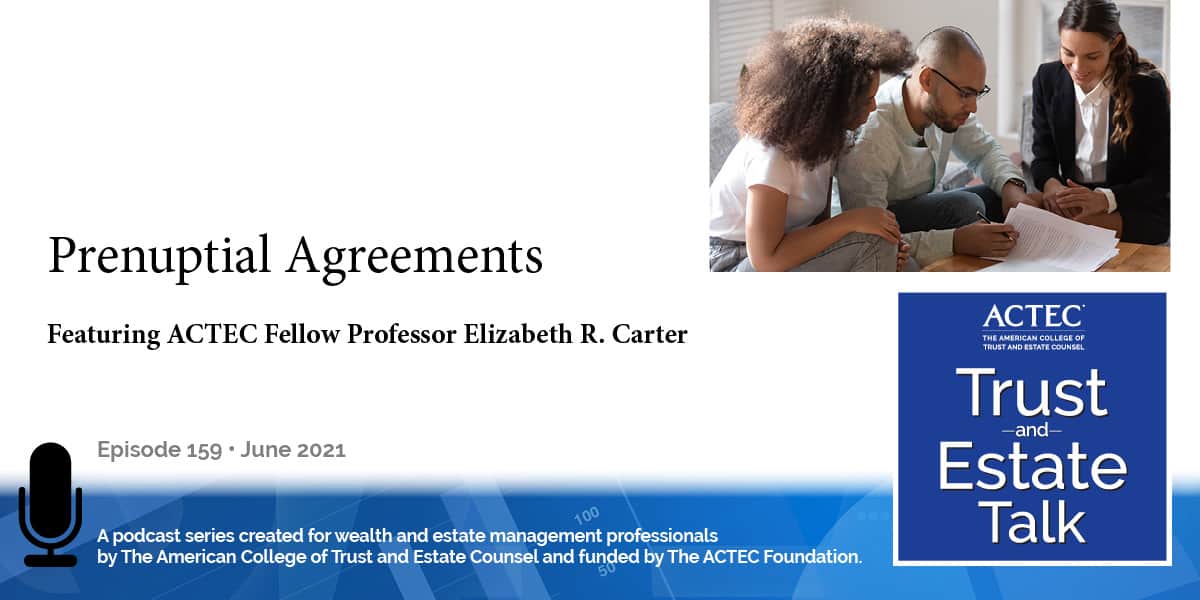 This is Travis Hayes, ACTEC Fellow from Naples, Florida. Is joint representation of a couple who intend to marry and will be entering into a prenuptial agreement possible under Model Rule of Professional Conduct 1.7? To teach us more about this topic today, you will be hearing from ACTEC Fellow Professor Elizabeth Carter of Baton Rouge, Louisiana. Welcome, Professor Carter.

Hi. Thank you. I’ve been thinking about and writing about prenuptial agreements and equality in marriage relationships for a number of years. One thing I’ve been thinking about and writing about is the possibility of joint representation of spouses entering into prenuptial agreements based on the model of joint representation of spouses that we often use in estate planning. Of course, many states would outright prohibit that model as a matter of substantive law. That is, the agreement might be deemed invalid if a couple had joint representation. But let’s set that aside for a moment, and step back, and come at this with an open mind.

And I want start with some general premises that I think most of us can agree on.

The rule that’s most obviously on point here is Model Rule of Professional Conduct 1.7, which deals with concurrent conflict of interest. Rule 1.7 tells us that any time a lawyer speaks to represent two different parties in a matter, a concurrent conflict may exist. Whether a particular joint representation creates a concurrent conflict depends in part on whether or not the clients’ interests are aligned. Even when the parties’ interests are not perfectly aligned, joint representation may be permitted and it’s often advantageous. So, the rule’s comments give us some notes on this. They say for example, a lawyer may not represent multiple parties to a negotiation whose interests are fundamentally antagonistic to each other. The common representation is permissible where the clients are generally aligned in interest, even though there’s some difference in interest among them. We use this model all the time in estate planning when we represent spouses jointly. We know that there are many benefits to that approach.

For one, it keeps costs down. The cost of one lawyer is usually exponentially cheaper than the cost of two lawyers. Number two, it facilitates collaborative decision-making and problem-solving, which has all sorts of additional benefits for the client. And third, it’s consistent with what most couples, in fact, want. So, whether that approach can be applied to prenuptial agreements depends, in part, on what the lawyer and clients believe the goal of the prenuptial agreement is. Are the goals of the perspective spouses aligned or are they fundamentally antagonistic?

So, goals that would not support a joint representation include getting as much property as possible from a client or protecting my client’s property or the property of the client’s family from the claims of the other spouse as much as possible. On the other hand, there are a lot of goals that would support a joint representation model; and according to a pretty informal poll we did with some of the Fellows on the Professional Responsibility Committee, these goals seem to be the ones that are the most common among ACTEC Fellows.

So, 1. Helping the spouses reach an agreement that is fair. 2. Protecting the spouses from the claims of third-party creditors. And 3. Facilitating joint decision-making and communication between the spouses. What all three of these have in common is they’re basically setting the spouses up for a successful relationship.

So, not many cases have considered the issue of joint representation in marriage contracts; but I found two that are pretty directly on point and yet, they stand at really polar opposite ends of the spectrum. The first one is this case Ware v. Ware, and it’s out of West Virginia. It involves a prenuptial agreement that the wife later wants thrown out. One of her arguments relates to the fact that she and her husband were represented by the same attorney in preparing the prenuptial agreement. At trial, the attorney testified that he believed he could properly counsel those spouses because they weren’t involved in a divorce and therefore, they didn’t have conflicting interests. Well, the court disagreed; and here’s what the West Virginia Supreme Court has to say about the idea of joint representation.

The court says that like divorce actions, the nature of prenuptial agreements is such that the parties’ interests are fundamentally antagonistic to one another. Indeed, the purpose of a prenuptial agreement is to preserve the property of one spouse, thereby preventing the other from obtaining that to which he or she might otherwise be legally entitled. Accordingly, the court holds that one attorney may not represent or report to counsel both parties to a prenuptial agreement.

When you read the case, you see there are a lot of problems with this agreement and with the lawyer’s advice. And as the saying goes, bad facts can make for bad law. And it’s clear that the lawyer’s representation in this particular case was deficient in several respects, but that sweeping statement by the court is, in my view, totally wrongheaded. Assuming that all agreements are fundamentally antagonistic is just so very contrary to what many agreements actually say. And it’s making an assumption about all agreements based on one bad case. It’s certainly very contrary to my goals in representing clients in those agreements. So, the court is assuming things about content and motivation that in many cases are simply not true.

The other case, Olsen v. Olsen comes out of Louisiana. Now, you should know that we view these agreements a little bit differently here in Louisiana. I mean, we do just about everything a little bit differently here in Louisiana. Many states began permitting matrimonial agreements in the 1970s and 1980s, and even then, they came into the law under a real cloud of suspicion. Well, we take a different approach here in Louisiana. Because of our civil law, rather than common law heritage, Louisiana has permitted them for more than 300 years, before we were even a state. So, our view is much more consistent with that of other civil law countries, and we view the agreements more favorably, generally speaking.

So, Olsen involves a postnuptial agreement signed shortly after the marriage. But the outcome would’ve been the same for a prenuptial agreement here in Louisiana. So, in Olsen, it’s the husband trying to get the agreement thrown out so that more assets are classified as community property. One of his arguments relates to the fact that the couple had joint representation. And he says Rule 1.7 should have prohibited that representation. Well, the court disagrees and to the Louisiana Court, the joint representation is totally unremarkable. The couple’s goals were essentially aligned. They wanted the agreement because they were small business owners. They wanted to protect themselves from creditors. They also wanted to clarify some ownership issues of their business interests. And Rule 1.7 did not present any problem in the view of the Louisiana Court.

The attorney in the case had testified at trial that she consulted with both parties, advised them to their interests, told them that their interests were potentially adverse; and that’s exactly what Rule 1.7 requires you to do. It’s exactly what we do in the estate planning model as well. The trial testimony also showed that both spouses were aware of and consented to the joint representation, which is also required by Rule 1.7. And with little analysis, the court says that based on the evidence presented, the husband failed to show that the attorney’s presentation of the parties violated the rules of professional conduct. In my view, that’s clearly the better approach. Certainly, there are going to be instances where Rule 1.7 would prevent representation.

If the client’s interests are in fact fundamentally antagonistic to each other, well then, joint representation would not be appropriate. In fact, marriage may not be appropriate if their interests are fundamentally antagonistic to each other. But if the goals of the client and the attorney fall into that second group of considerations – that is, if their goals are essentially aligned, although not identical – and if the clients give informed consent, then joint representation ought to be permitted under the rules. And we as estate planners have an excellent model for that approach of collaborative decision-making that we’ve used for years when we represent spouses jointly to an estate plan.

Thank you, Professor Carter, for providing us with your thoughts on the ability of attorneys to represent both parties to a prenuptial agreement.