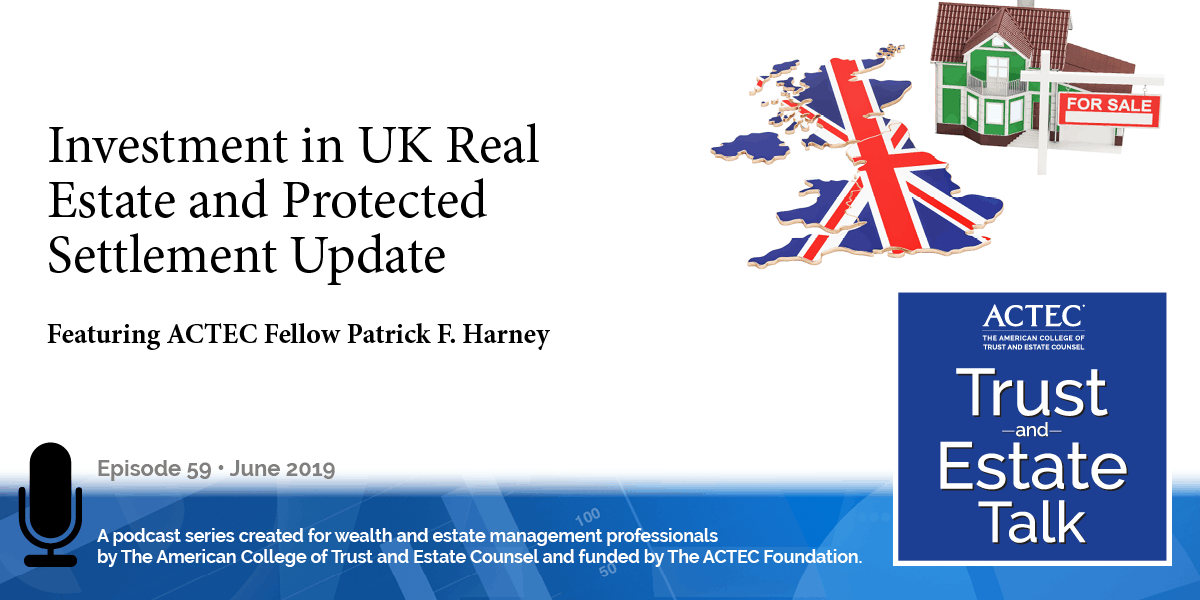 Thank you, Susan. Today I’m here to talk about two topics. One is an update on the UK tax treatment of offshore income gains arising in protected settlements. And to do that I’ll explain what a protected settlement is. And the second topic is, I’m going to talk to you about investment in UK real estate for US citizens.

So, in order to be able to update you on the UK tax treatment of protected settlements, I first need to explain what a protected settlement is. And in order to do that, this started with the UK tax changes in April 2017. So, at that time, they changed the rules in the UK to provide, and this all relates to non-domiciled individuals – so people who come to the UK and are not originally from the UK – so for that it means primarily most Americans that come to the UK would be non-domiciled for tax purposes. So, the rules changed in April 2017 whereby if someone was in the UK and resident in the UK for 15 out of the previous 20 UK tax years, then they were deemed domiciled in the UK for all UK tax purposes. Previously, there was a rule where after 17 years they became deemed domiciled, but only for inheritance tax.

So, this was a big change. And when they did that, they introduced this concept of protected settlements, which means that if a non-UK domiciled, UK resident individual settles their non-UK assets onto a non-UK resident trust prior to becoming deemed domiciled, so prior to being resident for 15 out of 20 years, then that trust will constitute what we call a protected settlement. And, another condition is that no additions are made by the settlor or any trust with which it is connected after the settlors become deemed domiciled. And if the settlor can do that, then it really is a statutorily approved non-aggressive regime for protecting non-UK source income and gains from UK tax until such time as a UK resident receives a distribution. So, it’s a kind of a taxation upon receipts regime. So, just to drill into that a little bit more and then I’ll explain the change that happened in November 2018. So, where again just for the settlor, take an American citizen who’s not domiciled in the UK, born and raised in America, comes to the United Kingdom and they settle a protected settlement. So, they create a trust before they become deemed domiciled with non-UK assets. It means there’s no automatic attribution of trust gains to the settlor. If the person was UK resident and domiciled, we would have look-through legislation to treat the gains as being his or hers.

So capital gains are only payable when the deemed domiciled settlor or another UK resident beneficiary receives a benefit that can be matched with trust gains. Non-UK source income then no longer automatically is treated as the settlor’s income, even where he or she can benefit. And again, this is a change from the pre-2017 rules where trusts were transparent for income tax, but not capital gains. So the income was treated as the settlor’s, but subject to the remittance basis. The position now is that the income is not treated as the settlor’s, so it’s what we call protected foreign source income, even though the settlor can benefit from the trust. So non-UK source income is taxed if the settlor or another UK resident beneficiary receives a distribution and that distribution can be matched with accumulated income in the trust.

So, the change that happened in November 2018 is that, I suppose to explain the change I need to explain the background. So, I’ve already said that protected settlements mean that non-UK income and gains and nonresident trusts are protected from UK tax. However, when they brought in the legislation there was a technical drafting error in the legislation that seems to indicate that offshore income gains, and I’ll explain what they are, were not protected. But it was always thought that this was just an error and the Revenue would correct it. But then they announced in November 2018 that they weren’t going to correct it.

So just to briefly read what they said, “A decision has been made not to amend the current legislation to include income arising in offshore non-reporting funds into foreign trust exemptions at this time. The current demands placed on parliamentary resource make it difficult for the government to justify returning to the legislation at this time to add to the generous package of protections which the government has already legislated for.” So, they said they weren’t going to kind of change the fact that offshore income gains are taxable on the settlor on an arising basis.

So, what we mean by that, we mean gains realize on disposes of interest in funds or collective investments which are non-UK funds, which are not registered with HMRC (Her Majesty’s Revenue & Customs), as having reporting status. So broadly, most US, pretty much all US mutual funds, except ones that have specifically applied for reporting status, would be non-reporting offshore funds for UK purposes, and then will be taxable on the settlor at 45 percent, even if they’re in a protected settlement. So that’s the takeaway point for people to kind of understand.

And very quickly, just explaining a case study of how protected settlements might help US citizens, if you have a couple who are US citizen couple, UK resident but not domiciled in the UK, they became resident in the UK in January 2005. So, under our rules they will become deemed domiciled on the sixth of April 2019. They have two young children at school in the UK. They plan to retire to the United States when the children finish school in five to 10 years’ time. They have substantial assets situated outside the UK.

The benefits for them of trust planning for their non-UK assets using protected settlement is twofold. One, they get excluded property treatment for inheritance tax purposes. So even if they died domiciled in the UK the assets are protected from UK inheritance tax. And secondly, they get this protected settlement treatment where there’s no automatic attribution of income and capital gains. with that exception for offshore income gains, to the settlor for UK tax purposes provided the protected status is maintained. So that can be very attractive. It’s very good for US couples that can afford not to benefit from the trust while they are UK resident. If they need to benefit, then it could lead to double taxation.

And then, just turning to the structuring of the acquisition of UK real estate, personal ownership is likely to be the best option. Where possible, consider if you’ve got a mixed citizen couple, one of whom is US and one of whom isn’t, consider owning in the sole name of the non-US spouse to benefit from the unlimited capital gains tax principal, private residence exemption. So, we have an Englishman’s home is his castle as they say, so we have an unlimited exemption for principal, private residence. Other options such as LLCs, or companies or trusts are generally unattractive for UK tax reasons, because companies are penalized heavily. And since April 2017, non-UK incorporated entities no longer service situs blockers for inheritance tax, except potentially under the US-UK Gift and Estate Tax Treaty. And then non-UK residents are subject to capital gains tax non-residency CGT since April 2015, because before that we didn’t tax UK real estate or non-residents as in the tax, the disposal of it. ATAD Capital Gains Tax has been abolished, which is a form of capital gains that apply to companies.

So, there is a stamp duty tax payable on the acquisition of UK real estate. It’s a transaction tax. It can be quite penal and can be up to 15 percent for purchase prices above £1.5 million. And then there’s the, if you buy residential property through a company and there’s ATAD, which is an annual tax. And that really completes the discussion on the acquisition of UK real estate.

Thanks, Patrick for giving us an update on UK law.