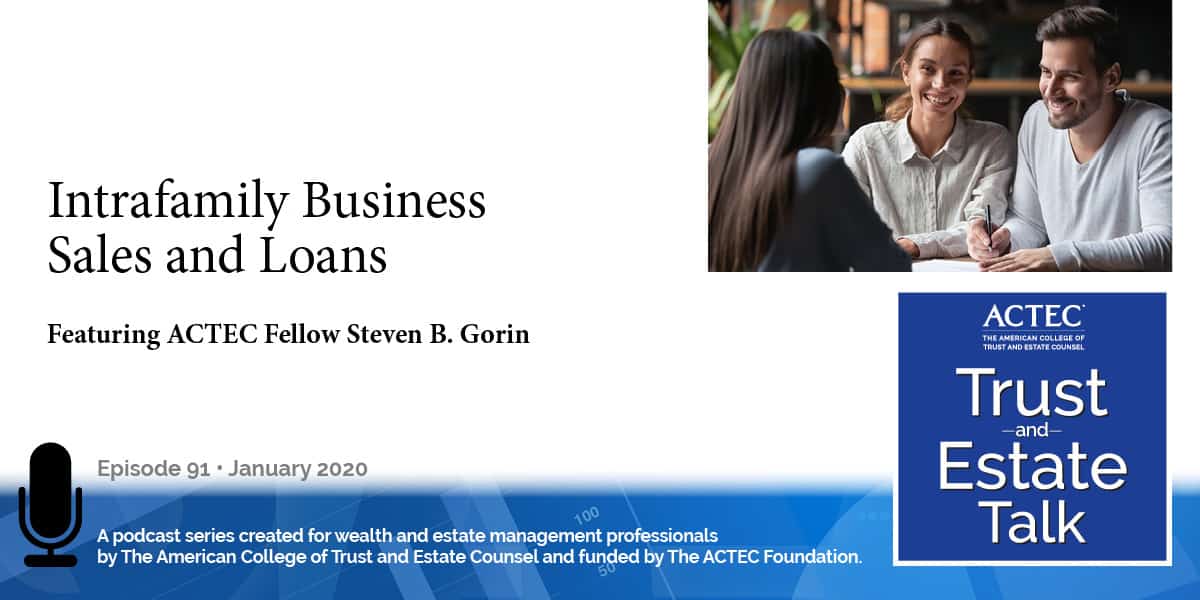 “Intrafamily Business Sales and Loans,” that is a subject of today’s ACTEC Trust and Estate Talk.

This is Birch Douglass of Richmond, Virginia. Intrafamily business transactions receive special scrutiny from the IRS and the courts. To give us more information on this topic you will be hearing today from ACTEC Fellow, Steve Gorin of St. Louis, Missouri.

Thank you very much. I appreciate this chance to talk about this important topic. So, whenever you have family members or related businesses who do transactions with each other, the IRS and the courts will always take a special look at them to see whether there’s anything going on there that requires being taxed when the taxpayer is trying not to have it taxed.

So a recent case called Dynamo Holdings evaluated what happens when you have a corporation that does a transaction with another business entity, and it also talked about when you had loans between family-owned entities, and this particular case provides some standards that people should be looking out for when they’re doing their transactions. So, first of all, in the Dynamo Holdings case, we had a corporation that transferred property to different entities and the question was: if the transaction was something that’s for a good business reason, where there wouldn’t be a taxation of that or whether when the property got transferred to the other entity, whether that was for some kind of a bargain deal. Because whenever you have a corporation that distributes property, then, that’s a deemed sale by the corporation of that property. And so, when that deemed sale occurs then, there’s going to be tax to pay. So, in the Dynamo Holdings the court revisited some of the rules here on what’s called a constructive distribution. So, when the corporation is deemed to have made a distribution to its owners, followed by additional transactions, because the distribution from the owner would again trigger this tax. So, if you have a bargain sale where you have the corporation receiving less than the value of what it’s giving out, then there may very well be a tax.

The Tax Court in the Dynamo Holdings case said that:  A bargain sale between related parties does not automatically result in a constructive distribution; rather there’s a two-part test, and only if the taxpayer flunks both parts do you get a tax.  So, the first test is an objective test. Did the transferor cause funds or other property to leave the control of the transferor corporation? So, it left control of the corporation and allowed the stockholders, the owners, to exercise control over the funds or property directly or indirectly through some kind of instrumentality other than through this corporation. That’s number one. Number two, did the transfer occur primarily for the shareholder’s personal benefit rather than a valuable business purpose? So again, you would need to flunk both the objective and subjective test in order to have taxation occur. So, the objective prong, you ask first of all, did the transferred funds leave control of the corporation and did the owners of the corporation somehow control the funds directly or indirectly other than through the corporation? And, for the subjective prong it asked whether the transfer occurred primarily for the benefit of the common shareholder rather than for valid business purpose.

So, when you look for the underlying purpose, you’re going to look at objective criterion of the actual primary economic benefit to the shareholders. So even though there’s a subjective test, you look to see whether there was an actual benefit to those shareholders. So, if the primary purpose is a valid business purpose, then that’s not considered to be a shareholder benefit; rather it’s considered to be a corporate benefit. On the other hand, if the primary purpose of the transfer is to benefit the shareholder’s family, then that’s benefiting the shareholder’s family, not the corporation. So then, that would tend to be bad.

So in the Dynamo Holding’s case, what happened is they had four or five different sales for about $200 million and the transferor corporation didn’t get sufficient value back and they didn’t prove that there was a great business purpose for it, and so, the taxpayers lost and there was a deemed sale. And this contrasts to a prior case, called Cox Enterprises, where the taxpayer did prove a business purpose and was able to get tens of millions of dollars of value transferred. So, you really have to be careful about whether you have one or multiple transactions and really look at the Tax Court standards.

The next aspect in Dynamo Holdings has to do with intrafamily loans. So, if you have something that you’re calling a loan between family members or family controlled entities, and a loan is defined to be an unconditional obligation on the part of the recipient to repay the money and an unconditional intent on the part of the transferor, the lender, to secure a repayment. So basically, there has to be no bones about it. You have to have this intent to have the loan repaid and to enforce the repayment, and in the Dynamo Holdings case they actually had pretty sloppy documentation to begin with, and they went back later on and cleaned up their documentation. But what’s really important that happened here is that all of the parties kept their books on a consistent basis, the lender reported the interest income from the loan, the borrowers reported interest expense from their loans, and when they dealt with third parties they recognized these loans on their books. So as far as they’re concerned, it was a valid loan and these loans actually got repaid, which is probably the most important part in persuading the Tax Court. And one of the parts that the Tax Court said is: You know you really should have your loan documentation. If you do that’s helpful, but you have to have it coupled with the actual performance and the actual treatment as a loan. And, if you don’t have it perfect, but you do do everything the way a loan should be done in terms of the actual conduct of the parties, then we’ll overlook some imperfect documentation. And so, in the Dynamo Holdings case, they actually did have this flawed documentation but the court said:  Okay, we’re going to give you a pass on that, because you behaved in every other manner, the way a borrower and a lender would behave.

So, I hope that this has helped give you some idea on what’s going on with intrafamily sales and with loans in this important case. So, I hope this is helpful and just to close with another thought, a tax advisor is somebody who solves a problem you didn’t know you had in a way that you don’t understand and I hope that this should shed some light on this and the need to investigate this and make sure that you’re not falling into any bad traps. Thank you.