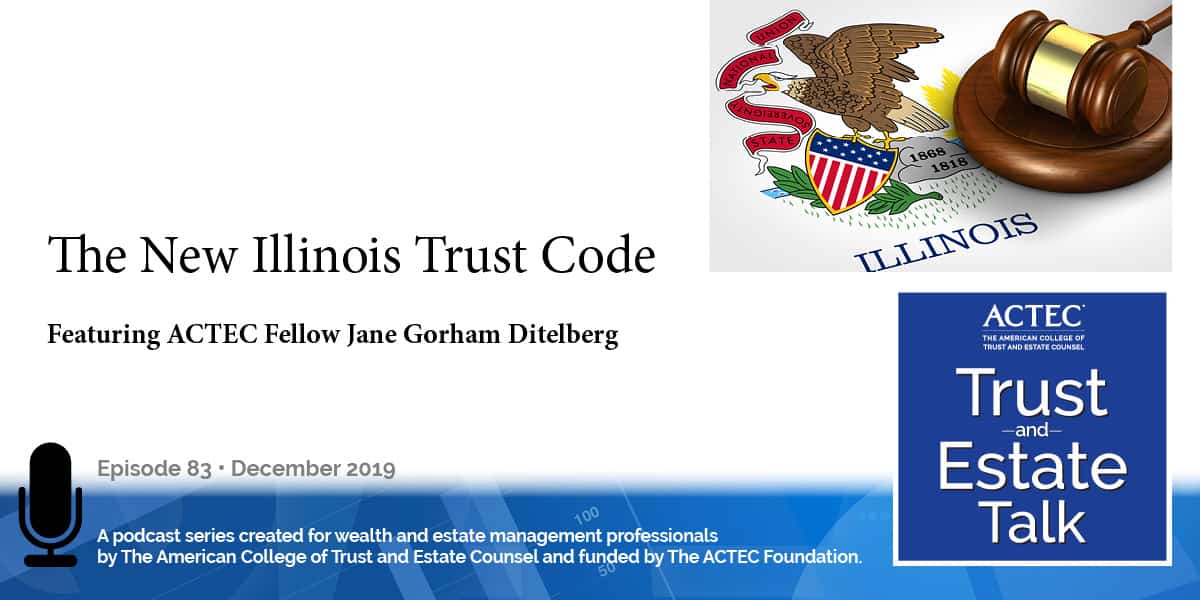 Thank you. It’s a pleasure to be here. This is a preview of what we are going to be talking about a lot during the next year if you’re an Illinois Fellow and that is the new enactment of the Illinois Trust Code, which is based on the Uniform Trust Code, although being from Illinois, we do things our own way, the Chicago way, so there are some changes that we have made from the uniform law. I spent almost a decade on the task force from the Chicago Bar Association that drafted this and so I feel a little qualified to talk about what our goals were. Our intent was to use the Uniform Trust Code’s structure, numbering system and terminology, so practitioners from other states would know where to find the parallel Illinois provision.

However, we kept unique Illinois law provisions – some of the ones that people asked about were the Pet Trust Statute and trust for disabled beneficiaries — that we have a unique protective provision on third party settled trusts for disabled beneficiaries. We also wanted to use Uniform Trust Code provisions to fill in the common law, such as the duties of the trustee that are found in Article 8 and the basis for trustee removal, which is found in Illinois common law, but had not been previously codified. We also wanted to include some useful new ideas that we observed from other states that had adopted a trust code, including things like designated representatives and expanded concepts of representation in non-judicial settlement agreements.

Now, Illinois has, in fact, remained a grantor intent state, so we have not adopted the provisions of the Uniform Trust Code that shift the focus to the best interests of the beneficiaries. That would be a radical departure from existing Illinois law, and we did not go in that direction. We also have a more limited Section 105, which are the provisions that cannot be changed in a trust where you can’t override them by drafting. Our list is – we do have one, but it is shorter than the one in the Uniform Trust Code.

One of the provisions that has been getting the most attention about the new Illinois Trust Code are the notice and accounting rules that are found in Section 813. Current Illinois law requires that a trustee provide accountings and notice to current income beneficiaries only. The determination was made that going forward, all current beneficiaries, that is to say, those who must or may receive income or principal as a current time, not in a future capacity, but as a current beneficiary, have to get notice and have to be able to receive accountings, and that’s a provision that we have put in that you can’t draft around. However, in deference to the many grantors who don’t agree with all of that, that’s effective only for new trusts that become irrevocable after January 1, 2020 or revocable trusts where a new trustee starts acting after January 1, 2020.

The default, if you don’t draft around it, is that both current income and principal beneficiaries and presumptive remainder beneficiaries will be entitled to accounting. So that’s something people may want to draft around. We have included new concepts of representation that can help you comply with the notice requirement, including representation by the holder of a broad special or general power of appointment, and the concept of a designated representative for remainder beneficiaries and current beneficiaries who are under age 30. We have expanded the ways that a court can modify a trust in Illinois. Previously, the court had very limited circumstances under which it was allowed to modify a trust. Those have been expanded in the Article 4 provisions from the Uniform Trust Code, most of which we adopted as they are, and which has the effect of expanding what can be done with an Illinois non-judicial settlement agreement.

We have shortened the statute of limitations for accountings that are given under the new statute from three years to two years and we have clarified the rights of creditors and put them all in one place.

I hope this is helpful and gives you a taste of what’s coming with the new code. You can find it in Title 760 Chapter 3 of the Illinois Compiled Statutes. Thanks, and have a great day.

Thank you, Jane, for educating us on the new Illinois Trust Code.