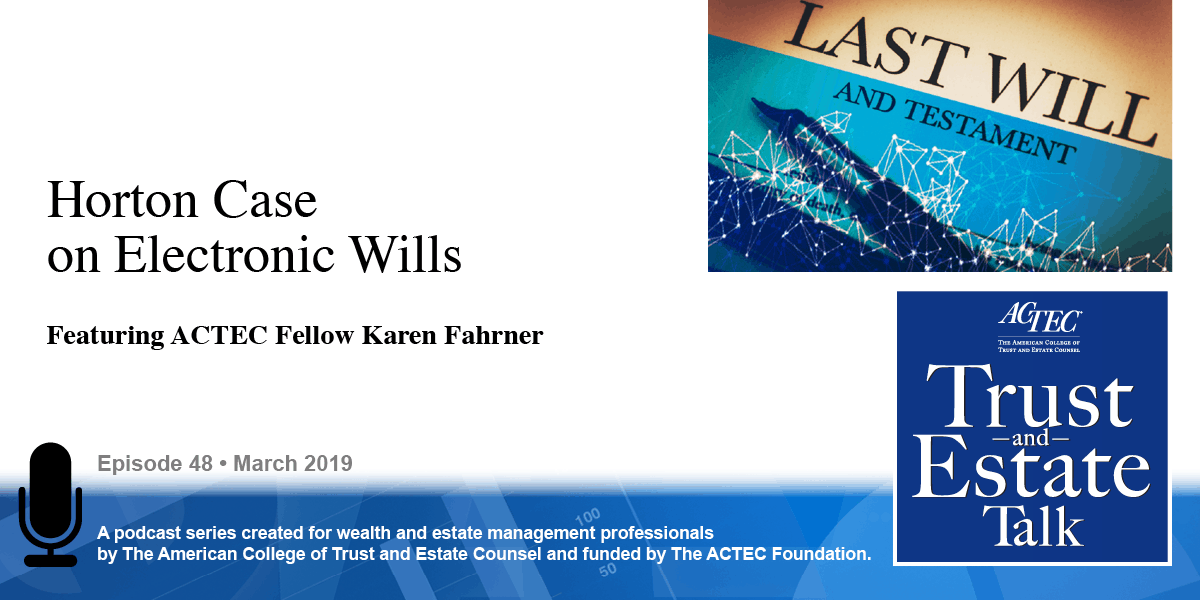 This is Birch Douglass, an ACTEC Fellow from Richmond, Virginia. Can a person create a valid will that is not formally executed as required by state law? There are some states that have adopted a harmless error statute. There have been several cases recently worldwide on this subject as it relates to electronic writings. Here today to discuss the recent Michigan case, The Estate of Horton vs. Jones, is ACTEC Fellow Karen Fahrner of Philadelphia, Pennsylvania. Karen…

Thank you, Birch. In Horton, the Michigan court dealt with Michigan’s Harmless Error statute which is actually based on the Uniform Probate Code as applied to the attempted probate of an electronic writing. On appeal from the lower court’s decision to admit to probate the electronic writing as a last will of the decedent, the Court of Appeals, per curium, affirmed, but I would like to go over facts, Michigan law, some of the arguments of the parties and then the court’s analysis.

The facts in this case are tragic. The decedent committed suicide at the age of 21 after leaving an undated, handwritten journal entry, which stated “My final note, my farewell, is on my phone. The app should be open. If not, look on Evernote.” And it turns out Evernote is a software application that can store audio memorandum, webpages, and emails and documents. The journal entry, which was in the decedent’s handwriting, also provided an email address and a password for Evernote. The Evernote application was on the decedent’s phone and it contained a typed, not a handwritten, electronic writing- which I am going to call writing for purposes of this discussion.

It existed only in electronic form and the decedent’s name was typed at the end of the writing. Among the personal sentiments expressed in the writing were things like religious and self-deprecating comments, apologies and requests relating to his funeral arrangements. But in addition, there was a full separate paragraph on how he wanted his property distributed and here are some illustrations of what he included. “Have my uncle go through my stuff and pick out the stuff that belonged to my dad or my grandma and take it. If there is anything he does not want, feel free to keep it and do with it what you will.”

The decedent’s relative had also filed a petition for probate, nominating herself as personal representative and alleged intestacy. So before we can get into the arguments of the proponent of the will and the contestant of the will, this electronic will, we should know a little bit about Michigan law. First of all, the question would be who can make a will and the second would be what are the requirements of a will? As to who may make a will, any person who is over age 18 and has sufficient mental capacity may make a will. As to what the requirements are, a will is valid if it is in writing and signed by the testator and signed by two witnesses and there are some exceptions to this, two of which were considered by the court.

One exception has to do with a holographic will, a will that does not comply with the formal requirements of execution, but still may be regarded as valid as a holographic will, whether or not it is witnessed, if it is dated and if the testator signature and material portions of it are in the testator’s own handwriting. This document, that was the electronic writing, clearly was not a holographic will because it didn’t have a signature and there was nothing in the testator’s own handwriting. But the next statute which was an exception is called the harmless error statute and that under Michigan law says that although a document or a writing was not executed in compliance with the formalities of executing a will, it can be treated as if it was in compliance if the proponent of the document establishes by clear and convincing evidence that the decedent intended it to constitute the decedent’s will.

So against this backdrop, we have arguments. The contestant said that there was no clear or convincing evidence at trial, said that there was only an attempt to make a holographic will which failed and said that the lower court erred by recognizing this electronic writing as a will and in accepting a printed copy of the writing as into evidence. Further, the argument was no one saw the decedent type the writing and that actually creates a question of its authenticity. The proponent had introduced into evidence, the circumstances surrounding the decedent’s death and the discovery of his suicide note and the contents of the writing.

The handwritten journal entry was stated to be in the decedent’s handwriting and it actually directed the reader to go to the decedent’s phone to locate the writing. The specifics of the writing the court held were very clearly intended to describe his assets and to say how those assets are distributed. Certain information about the journal and the phone, including the decedent leaving it in his room before he left to commit suicide were also introduced. The court agreed with the lower court’s conclusion that the evidence was unrebutted, that the deceased hand wrote a note directing the reader to his cell phone with specific instructions as to how to access the document he had written electronically in anticipation of his imminent death by his own hands.

So, in summary, the court of appeals held the lower court did not err when it concluded that the proponent established by clear and convincing evidence that the decedent intended his electronic writing to be his will and it agreed with the lower court that the electronic writing was properly admitted to probate. While Michigan does have a statute regarding the formalities of a will that are generally necessary for a will to be valid, Michigan also has statutory exceptions. One of these exceptions, as we discussed, is its harmless error statute. That statute treats a writing as if it had been executed in compliance with the formalities otherwise required by for a will to be valid if the proponent of the writing establishes by clear and convincing evidence that the decedent intended the writing to constitute a will. It was on the basis of this statutory exception that the electronic will, in this case, was allowed to be probated. And that is the conclusion of the summary of the Horton Case.

Oh Karen, thank you so much for this update on electronic wills.