What Estate Planners Need to Know About Social Security, Medicare, and the Self-Employment Tax 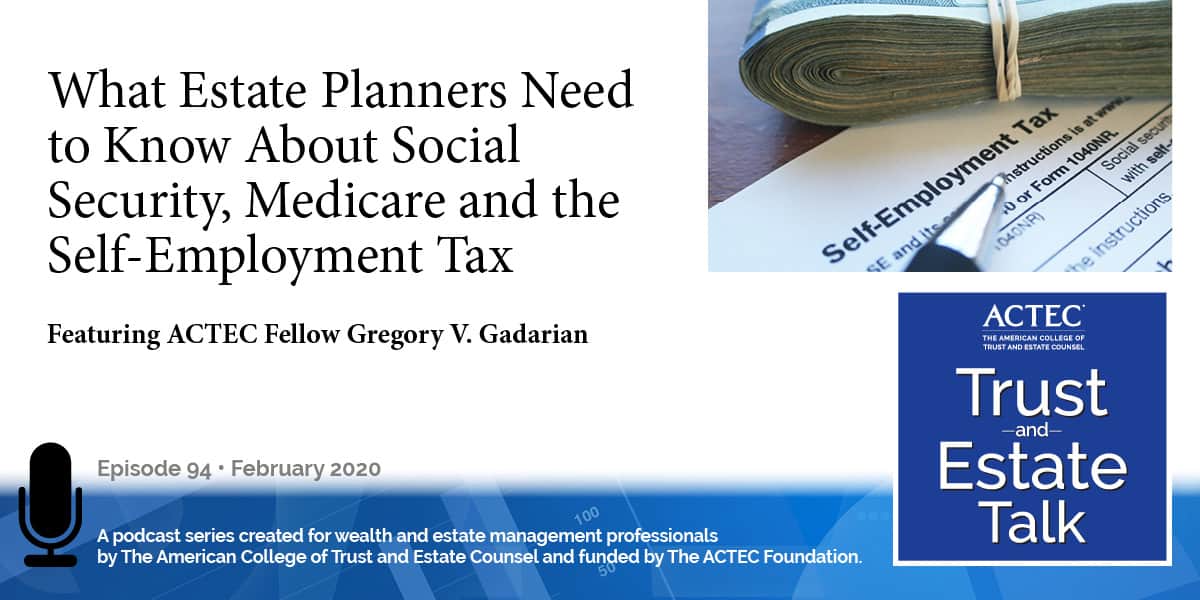 “What Estate Planners Need to Know About Social Security, Medicare, and the Self-Employment Tax,” that is the subject of today’s ACTEC Trust and Estate Talk.

This is Ed Beckwith, ACTEC Fellow from Washington D.C. The eligibility rules for Social Security and Medicare, the federal and state income taxation of Social Security, and the ability of dependents to receive those benefits are rules the estate planners need to know. Self-employment tax rules also can be very important. To give us more information on these topics you will be hearing today from ACTEC Fellow Greg Gadarian of Tucson, Arizona. Welcome, Greg.

Thank you, Ed. That was a great summary of what I am about to talk about. I think you covered everything, but seriously… one of the things that estate planners need to be able to advise their clients on is when to apply for Social Security and how it covers dependents, including grandchildren, children and multiple spouses. This also includes when you have ex-spouses, as well as our parents, in some situations, and how that all fits in with Medicare. The self-employment tax is one aspect of it; now, I will deal with that first and then go to the benefits that are available. Much of the focus of tax planners is to reduce or eliminate self-employment taxes to the maximum extent, and those self-employment taxes only apply to people that are in sole proprietorships or partnerships. That is the starting point. Therefore, employees have withholding taxes, which are their Social Security taxes and Medicare taxes—and, by the way, those taxes end up running 12.9 percent and 2.3 percent, as we all know, for the two combined taxes. The Social Security tax phases out now at $132,900, so any income earned above that level is not subject to Social Security taxes but is fully subject to the Medicare tax of 2.9 percent and an additional Medicare tax of 0.9 percent, but that only applies to people with a much higher income above $200,000.

Many of our clients are self-employed and want to reduce their self-employment tax, especially the Medicare tax. There are two ways of accomplishing this. One way is an absolute guarantee that it works is to create a limited partnership. I will give you this example. I have a client who owns multiple pawnshops, and those pawnshops were organized as separate limited liability companies (LLC). The client was over age 70 and wanted to reduce his tax liability. We put all of the pawnshops into a limited partnership, and this only works for limited partnerships; it does not work for limited liability companies or general partnerships. There is a statute Section 1402(a)(13), which specifically says that those shares of income allocable to a limited partner are not subject to self-employment tax. This is an interesting provision that was put in the law when you and I were both young lawyers; it was to avoid allowing people to qualify for Social Security by becoming a partner in a partnership. Typically, this was for the homemaker spouse who had no Social Security benefits, and this was a way of getting them benefits. Thus, Congress responded by enacting this statute Section 1402(a)(13), which says, “No, you are not going to qualify for Social Security as a limited partner.” This remains in the statute and is not used nearly as much as it should be by putting businesses in this type of entity.

The other is subchapter S corporations, which probably has more use. In a subchapter S corporation, the K-1 income—the earnings a shareholder pays tax on, whether or not there is ever a distribution and which is not subject to self-employment tax—and we see a great deal of litigation… numerous cases with the IRS, where the IRS is saying, “You paid yourself too small of a salary.” They said, “Ed Beckwith, you are worth more than $12,000 a year as an attorney. You are worth at least $24,000, so we are going to increase your compensation income by the additional amount, and the $200,000 that you took out as dividends—we are going to treat a good portion of that as compensation.” Therefore, many people tried to avoid this tax, in not necessarily a wise way, and I say that intentionally because of the fact that we must consider what Social Security benefits apply to us. What benefits do we receive for what we are paying into it? If we think about it… If I am a younger person, and I die when my children are under age 19, they receive benefits as dependents until they turn 18. Therefore, I am paying for a form of insurance. The other thing is that it also gives my spouse benefits, which is another form of insurance. Therefore, I do not want to cheat myself or my family by not paying money into the system as either an employee or someone who is self-employed. Thus, this is one thing that we must advise our clients about, to think about what you are getting for the Social Security in taxes that you are paying in.

Now, let us look at the Social Security benefits. I described briefly that it is not only benefits to you and me, as a retiree, but also the benefits that our spouses, children, parents, and grandchildren can potentially receive. The maximum amount of benefits we can receive is about $3,770, if we are age 70. If we are age 65, it is $2,757 a month; initially, the whole question is that most of the literature is on when should we start applying for benefits—at age 66, when we first have the opportunity, or 67 if you are born after 1954, or do we wait to age 70? I think there are three factors it depends on. One is your health. Ask your doctor if you are going to die soon, because you want those benefits as soon as you can get them, which would be age 62, and there’s a reduction if you get it at age 62. The second question is do you need the money? Okay, well, I am not sure that Ed may need the money, but I do not really need the money, because I am still working. Therefore, I do not need the money at this point. Then, the third question is my marital status and other similar issues. My marital status, if I defer until age 70, my wife receives whatever I was getting at my death. Therefore, if I am at $3,770, because I have died, my wife will receive surviving spouse benefits of $3,770. Thus, she benefits from that. Those are the types of details that I think should be considered, though for most of the population—and not simply people with higher income—they will take Social Security as soon as possible, which may make sense, because they need the money. It is my understanding that it is the primary retirement income for about 90 percent of the population, which was an astounding number when I first saw it.

The coverage is for surviving spouses, and a surviving spouse will receive the higher of what he or she was originally receiving or mine. The other factor that is considered is how long you must be married in order to be a surviving spouse? I was shocked when I discovered the answer – nine months of marriage. In the very first case I was involved in that involved that, a woman who was getting married was going to lose her Social Security benefits because she only had them through a divorce. Well, she was going to lose those when she remarried; so, we drafted a prenuptial agreement that stated if her husband—who was my client—did not live nine months, she was going to get alimony to make up the difference. There are other benefits as well, my wife can receive benefits, not as a surviving spouse but simply as a spouse. She can get 50 percent of what my benefits are. That is for the spouse that was usually the homemaker or somebody who was not in the employment system themselves. Upon divorce, if you have been married for 10 years, you will receive Social Security benefits through your ex-spouse; however, as I mentioned earlier, you could lose those. Social security benefits are also available for dependent children, and we have two classes of dependent children. I mentioned one class in which the child is under age 19; if I die and I have children under age 19, they would receive Social Security benefits. They also get Social Security benefits if I start receiving them because I am disabled or if I have retired. Therefore, those of us that have children later in life and are now collecting Social Security because we are at 66 years old, our children receive a check. Strangely enough, I have had many clients who have had to adopt their grandchildren. They adopted their grandchildren because there were substance abuse problems with the parents, and those grandchildren became children and then they received Social Security benefits. Thus, we see those types of benefits applying. We also see benefits going to dependent parents. For example, my mother, who was living with me and I was providing half of her support… if I had predeceased her, she would have received Social Security benefits through me. Therefore, when people consider avoiding paying Social Security taxes, they should look at the range of benefits that are available before taking those steps; think it through, and the ACTEC attorneys, as advisors, must be able to advise our clients. These are the benefits. Think about it; maybe you want to pay the maximum into Social Security. Thank You.

Greg, thank you for educating us on these complicated, yet very important, tax rules.