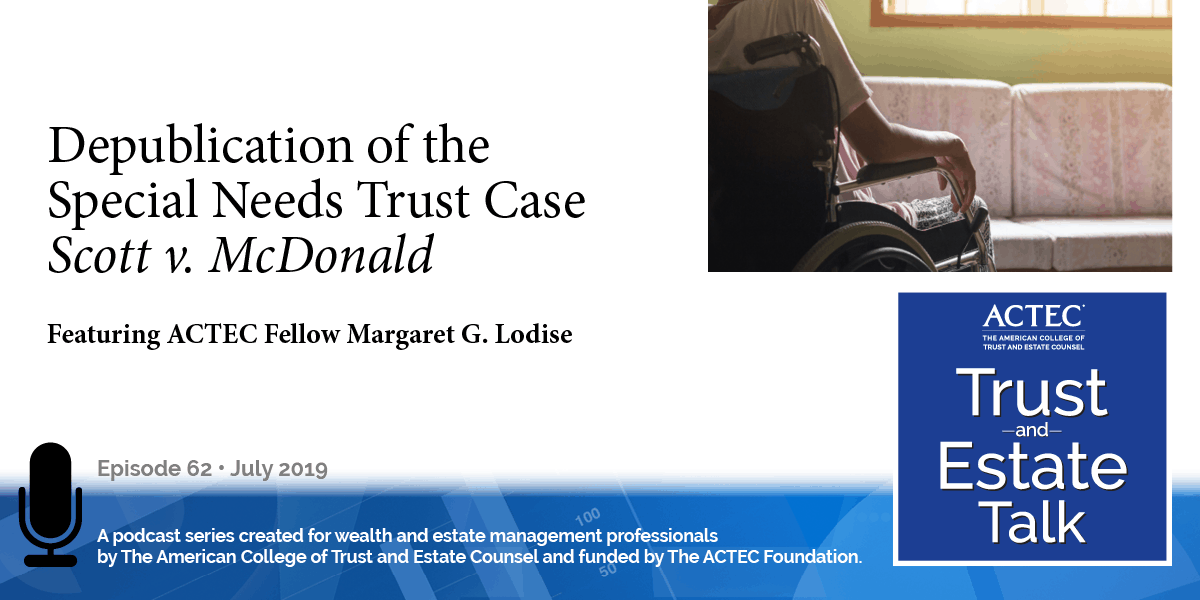 This is Kathy Sherby, ACTEC fellow from St. Louis. The California Supreme Court issues a rare depublication of a case that has important, substantive implications for the disabilities community. To present the case and ACTEC’s role in the depublishing effort, we will hear today from Meg Lodise, ACTEC fellow from Los Angeles. Welcome, Meg.

Thanks, Kathy. So, the Scott v. McDonald case was a California Court of Appeal case from the Fourth District, and it ruled upholding a surcharge against a trustee of a Special Needs Trust. Surcharge was about $92,000, and based on all the facts of the case, it seems apparent that the surcharge was appropriate. Unfortunately, the Court of Appeal in ruling on the surcharge took the language in the trust that said that the trust was not a “Support Trust” to mean that the trustee was improperly paying for things like food, transportation, things that are typically accepted as appropriate payments for a special needs trustee to make.

ACTEC was alerted to the case by another Fellow, Kevin Urbatsch, who sent a request to the Amicus Committee to write a letter in support of the effort for depublication. In California, we have a system where you can ask that a case which had originally been published by the court can be depublished by the Supreme Court. The effect of that is that the case is still good law as to the parties involved in the case, but it’s not citable for any other purpose. And upon reviewing it, the ACTEC Amicus Committee decided that there were significant risks if this wound up being citable law because of the court’s mishandling of the ruling about the support language. And so, the Amicus Brief Committee decided we should write a brief, or we should write a letter.

And we argued to the Supreme Court of California in our depublication letter that the continued existence of the opinion would create a citable opinion contrary to long-standing federal and state law and policy on the proper use of SNT (Special Needs Trust) funds, that it would place limitations on the future use of SNTs for persons with disabilities, contrary to the stated intent behind Congress’ authorization of SNTs, and that it would jeopardize both SNT drafters and trustees who’ve been appropriately drafting and administering SNTs over the past 25 years since they were authorized by Congress. And they were concerned that all of those people would be potentially impacted by this case.

What the McDonald court had said that was problematic from our perspective was there was language in the trust that said that this is not a trust for the support of the beneficiary. But there was also language in the trust that says the funds of the trust may be used as an emergency or backup funds secondary to public resources. It then defined special needs as including without limitation, special equipment, programs of training, etc., things that are typical in a Special Needs Trust.

So, this was very typical language. It is language that works under the regulations. Title XVI of the Social Security Act provides for the basics for setting up a Special Needs Trust. And there are regulations within the Social Security Operations Manual that sort of specify what you can put into a Special Needs Trust so that it will not be deemed income to the special needs beneficiary. And this business of it not being a support trust is one of the keys to that regulation because it said it’s not a support trust, we cannot allow the trustee to use funds within the trust to pay for as they say, housing or food or anything like that. We were concerned that this might get picked up by other courts in other jurisdictions. The Amicus Committee submitted the depublication request on October 15, 2018. There’s a timeline that gives you a strict timeline for when you have to submit it by; we submitted it by the 15th.

On November 28th of 2018, the Supreme Court of California issued its order depublishing the opinion. They didn’t do anything else other than just say depublished. You don’t get a nice opinion or anything like that explaining the reasoning. But we certainly think that ACTEC being able to point out this was not just a concern for a California trustee but also impacted federal interpretation of regulations and potentially impacted interpretation of Special Needs Trusts and trustees and drafters throughout the country, probably meant something to the California Supreme Court and resulted in the depublication. So, we view it as a win for the Amicus Committee and for ACTEC.

Thank you, Meg for educating us on this case — depublication.