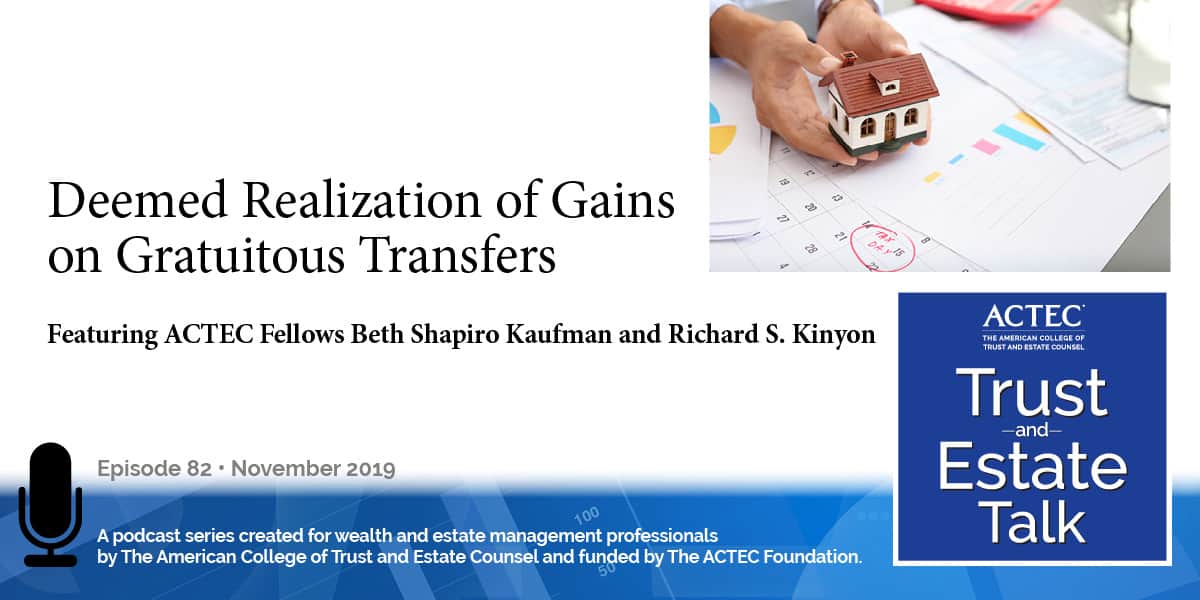 “Deemed Realization of Gains on Gratuitous Transfers,” that is the subject of today’s ACTEC Trust and Estate Talk.

This is Jean Carter, an ACTEC Fellow from Raleigh, North Carolina. We have a technical topic today with major policy implications for our country. This is the first in a series of big idea podcasts. To give us more information on our topic, you will be hearing today from ACTEC Fellow Beth Shapiro Kaufman of Washington, DC, and Dick Kinyon of San Francisco. Welcome Beth and Dick.

Right, the 1969 proposal was actually by the Nixon administration, of the Republican administration and the 2016 one was by the Obama administration, the Democrats. So, you might say this is a bipartisan concept and the Canadian tax was enacted about 40 years ago; so it has been in force for many years and seems to work well. The people who support a deemed realization tax argue that taxing capital gains when an asset is gifted or transferred at death would close the gaping loophole in the income tax law and terminate inconsistent treatment between the income tax basis of gifts, which is a carryover basis, and bequests, which is the tax-free step up in basis or step down if the assets have depreciated, resulting in substantial, additional revenue to the government without raising taxes or reducing exemptions or deductions.

So, what are the basic attributes of a deemed realization tax?

Well, in the report, we proposed parallelism between the income and the gratuitous transfer tax laws as much as reasonably possible. Thus, a deemed realization would occur when and to the extent that a gift is complete for gift tax purposes. Assets are included in a decedent’s gross estate for estate tax purposes and trust assets are subject to a taxable distribution or taxable termination for generation-skipping transfer tax purposes. The gain or loss deemed to be realized would be included in the donor’s income for the taxable year of the gift, a decedent’s final taxable year for a bequest of property passing at death or a trust’s taxable year during which the taxable distribution or taxable termination occurred for GST tax purposes. The tax would be similar but not identical to the Canadian deemed realization tax and the US Exit Tax applicable to cover expatriates, but it probably would supersede the tax on covered expatriates because it would be somewhat more comprehensive than that tax.

When Canada enacted their deemed realization tax, they also repealed their estate tax. Were we contemplating that in the US it would be a substitute for the estate tax?

No. I think not necessarily. That was not the proposal of the Obama administration or the Nixon administration either. Canada did not have a tax on capital gains at all when it adopted the deemed realization, and so they adopted a tax on capital gains and decided they also ought to deal with deemed realization as part of that tax. So they felt that was a substantial new tax, so they repealed their estate or inheritance tax, whereas in the US it would just be taxing what I consider maybe closing a loophole, where we had the tax-free step up at death and then tax capital gains because that is the policy of the tax, to tax gains through the person whose gains they are. So, and of course, the deemed realization tax is a tax on gains; the estate and gift tax is a tax on the full value of assets, and they really go together well because any tax on the gains would be deductible from the estate of the person transferring it and of course, if it is a lifetime gift, it would just reduce the assets of the person making the gift.

So, what are the policy considerations involved? Why would we want to do this?

Well, I would say the overarching policy of the deemed realization tax is to tax the gain and other income and realize loss to the person whose gain or income or loss it is. Exceptions — which is basically the Canadian system — exceptions would apply to transfers to spouses and qualified charitable organizations in which case the property would take a carryover basis. IRD, or Income in Respect of the Decedent, items generally would be subject to deemed recognition in the decedent’s final year but with an elective averaging mechanism to mitigate bunching of ordinary income in that year. An additional benefit would be that qualified retirement plan and IRA benefits could then be simply made payable to a decedent’s administrative trust, similar to life insurance proceeds, and be used to pay the tax on gain deemed to be realized with respect to illiquid capital assets included in the decedent’s deceased participant’s estate. This would simplify estate planning and might even result in less income tax payable with respect to those benefits if the tax were averaged back over lower income years of a retired decedent.

Would there be any exclusions or would this apply from the first dollar of capital gain?

So historically, one of the objections to having a tax like this is that it imposes a tax at a time when there is not any liquidity event. Does the report give any ideas about how to deal with that issue?

We advocated that Section 6166 and 6161 would be applicable to the deemed realization tax just as it is to the estate tax with respect to illiquid assets or for other reasons where the money just is not available.

In what ways would having a deemed realization tax simplify planning for people?

What do you see as the major drawbacks of having a deemed realization tax?

Well, there, of course, would be more tax payable by people because now there is a tax-free step up in death. I guess to me that is closing a loophole but anyway, it would result in more tax to those people. There would be — more complexity would be added to the tax law and I suppose you could argue that it would discourage gifting, which maybe is a policy that people want. I would argue that, not necessarily because if somebody makes a gift rather than let assets be deemed realized at death, there would likely be less gain deemed to be realized, and also the gift would be more valuable to the donee. Right now you give appreciated property to a donee and you pay gift tax or you use credit based on fair market value, but the appreciated assets are not really worth that amount to the donee because if the donee sells them, they’re subject to capital gains tax on that pre-gift gain. I think those are major elements of it.

I would add, just one more point, is that people making, there is a concern that you would have to keep track of the basis of assets when somebody dies and would the executor or whoever would be able to find it. I think if people knew there was going to be a deemed realization tax, they would be more likely to sell their assets before death, especially if they need the money or have to sell and they want to diversify or whatever, so probably there would be a lot less deemed realization at death than there would be, say, people would not hang on to assets as long if they knew there was going to be tax on the gain anyway.

All right. The full text of the report is available on ACTEC’s website. It has also been provided to the staffs of the Joint Committee, the Ways and Means Committee and the Senate Finance Committee as well as the Treasury Department.

ACTEC submits report on Report on Proposals to Tax the Deemed Realization of Gain on Gratuitous Transfers of Appreciated Property (October 15, 2019)

Well, thank you both for giving us more information on the deemed realization of gains on gratuitous transfers.