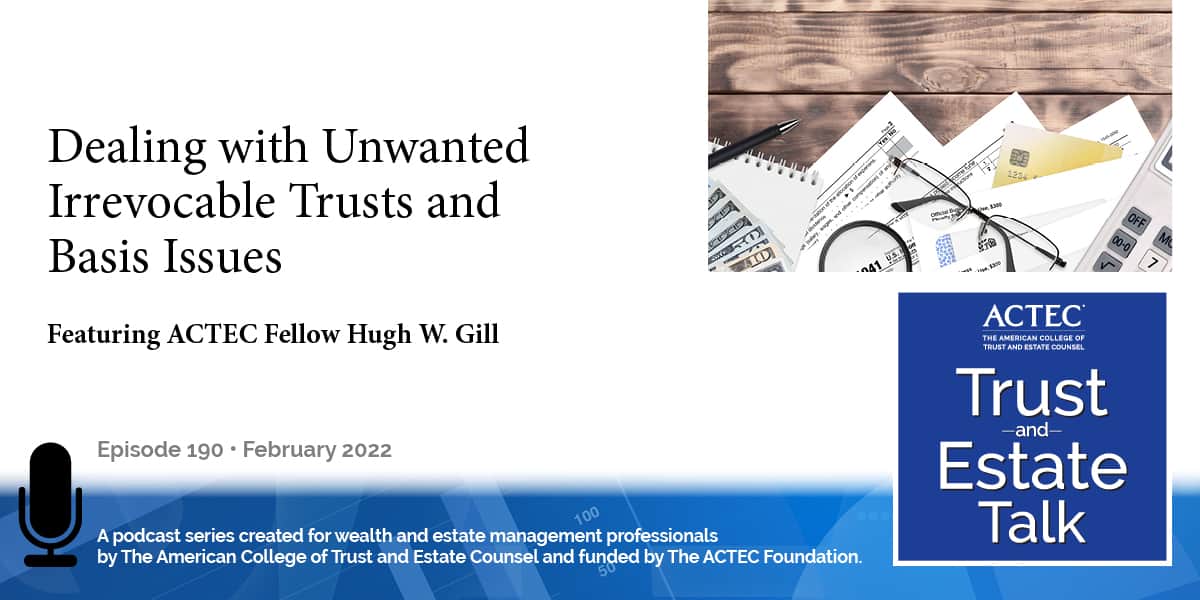 Thank you, Travis. My pleasure to be here. We have found that we are dealing with irrevocable trusts that no longer fit the situation in which they were drafted. The most common example is a revocable trust which would have the typical A-B plan or the family trust / marital trust plan, where assets would be used to absorb the credit at the death of the first spouse to die, with the balance going to the second trust. And these trusts become, again, irrevocable at death. But times have changed and the amount of the exemptions have changed.

And now we are able to move exemptions from one spouse to another. So, in other words, these plans, frequently the ones that the planners have drafted themselves, that were plugged directly into the Internal Revenue Code, no longer work the way they were anticipated. And, the consequential penalty, from an income tax standpoint that this credit shelter trust that we create (because we thought we had to, to lock in that exemption amount) loses the ability to get a second income tax step-up in basis at the death of the second spouse. So, the short of it is that our planning for estate tax purposes, which currently is no longer needed, is leading to a negative consequence on the income tax side.

Dealing with Irrevocable Trusts – First Option: Can I Avoid the Question?

So, what I did was think of a few questions on what would I do, or how could I go about changing an irrevocable trust that I don’t like any longer. Whether that be for tax purposes or others. And the first question that I ask is: can I skip this question altogether? That’s the best way to handle it, is to not have to. And the way to perhaps do that is if the trust is considered uneconomical. And by that, I mean the cost of administering the trust exceeds the benefit of continuing it.

And this you will find in the Uniform Trust Code Section 414(a). The Uniform Trust Code has a suggested number of $50,000. Meaning that the trustee could discretionarily eliminate a trust if the amount of the corpus was less than $50,000. As with a lot of the uniform laws, they became un-uniform as states adopted them. And each state has a different number. Kansas, for example, which is my state, has a safe harbor of $100,000 or less. Different states will have different numbers. But the basic question is: can I skip it altogether? And the answer is, yes, if the trust is uneconomical.

Second Option: Can I Blow it Up?

The second question is: if that doesn’t work, can I blow it up? Or can I distribute the assets out of the trust in an acceptable way that would allow us to fold up the trust and therefore no longer be restricted by the language of the document?

And, of course, the trust document may give absolute power to somebody to make a distribution. Whether that be a trustee or a trust protector. And, so by looking at the document, there may be a way out just by means of a back door if someone has the absolute power. And, of course, the absolute power to distribute assets in fee outright also means that you have the power to distribute a lesser property interest in trust. Absolute, of course, doesn’t really mean absolute. The trustee is still bound by the obligation of good faith and working in the best interest of the beneficiaries, and that is cited at UTC 814.

Third Option: Can I Use it Up?

But, if I can’t skip it and I don’t have the ability to immediately blow it up, my third question would be: well, can I use it up? And now we’re talking about discretionary distributions. Of course, the most common standard being “health, support, maintenance, education.” And, we can use those types of distributions to reduce the corpus of the trust. The discussion of distributions pursuant to an ascertainable standard could be a lengthy one in and of itself. But if you refer to the Restatement Third of Trusts at Section 50, it talks a little bit about how distributions can be used that fit a discretionary standard.

So, the third question is: can I use the discretionary distribution standard in the trust to use it up entirely? If not, if none of those three questions work, then I thought well okay, can I change it on my own? Can I just go and change the unchangeable trust? And the answer is yes. If the settlor and all the beneficiaries agree, then the trust can be terminated and split amongst the parties as they agree as part of that agreement, and that’s found at UTC 411(a).

The difficulty there of course is you have to have the settlors and the beneficiaries. There’s a mechanism in the statute that would cover most of the beneficiaries, but not all. But basically, the settlor has to be there and in my family trust / marital trust example, that’s not the case. But having everyone in agreement is one way to do that. Another might be a nonjudicial settlement, which is found at UTC 111.

Other Options: Can the Courts Help?

The next version would be – what about, I don’t have the settlor because the settlor is passed but, can all the beneficiaries agree? And the answer is yes, at UTC 411(b). The most significant issue there though is that it cannot be inconsistent with the material purpose of the trust. So, in other words, if the trust is set up for the specific purpose that is to be achieved, we can’t change the trust to get around that issue. So, that’s usually the biggest point there. But if that’s the case, if it’s not consistent, then the beneficiaries can agree.

If perhaps it’s consistent with the material purpose but situations have changed anyway, that would be the third variation of court help and that is “unanticipated circumstances,” UTC 412(a). Here, it furthers the material purpose of the trust, but the situation has changed such that we can’t follow the trust exactly like it’s written. And this is equivalent to our common law equitable deviation. More can be discovered about that at Restatement Third of Trusts, Section 66, Comment A.

Finally, we have the option if we don’t follow the economic option, or the beneficiaries’ agreement, or the unanticipated circumstances. Finally, the court can get involved to achieve the settlor’s tax objectives. That’s Section 416. There we have to be consistent with the probable intent and that is discussed at the Restatement Third of Property, Wills, and other Donative Transfers at Section 12.2. And the short of it is that I think that applies to a lot of cases because the typical clients don’t come in and ask for an A-B type plan without taxes being the primary objective, and the fact that there’s a penalty because of a change in the tax law might be a good way to have that.

So, those are the questions that I look at when I’ve got an irrevocable trust that no longer fits its purpose. Thank you.

Thank you, Hugh, for speaking with us today about dealing with unwanted irrevocable trusts.