Conflict of Laws and Relation-Back of Powers of Appointment 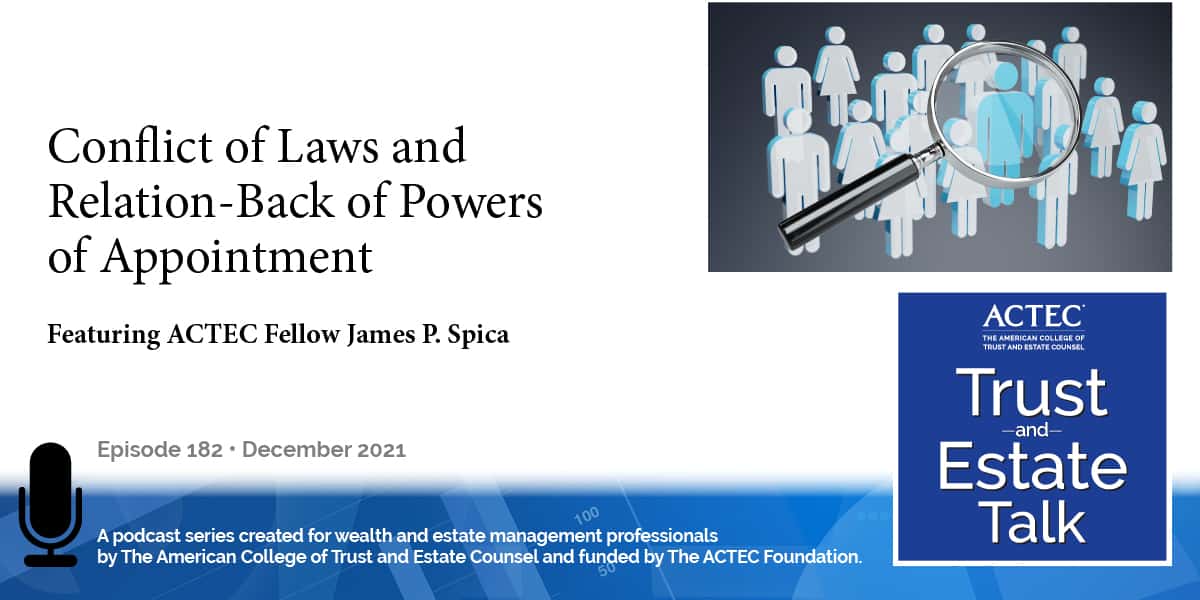 “Conflict of Laws and Relation-Back of Powers of Appointment,” that’s the subject of today’s ACTEC Trust Estate Talk.

This is Susan Snyder, ACTEC Fellow from Chicago. Joining me today is ACTEC Fellow James Spica of Southfield, Michigan and he’s here today to tell us about his article in the ABA RPTE Law Journal entitled Conflicts of Laws and the Transitivity of the ‘Relation-back’ of Special Powers of Appointment (scheduled to be published in 2022). Welcome, Jim.

The perpetuities cases stand for the proposition that the period during which the exercise of the special or testamentary general power of appointment can postpone the vesting of future interests is measured from the time of the power’s creation, rather than the time of the power’s exercise. So, if, for example, a trust created in a jurisdiction that has received and not abrogated the common law rule against perpetuities, grants a donee a special power of appointment over the res of the trust.

Future interests in the res created by the exercise of the power today, have to be certain as of today to vest within 21 years of the death of some life in being when the trust was created. In a jurisdiction that has abrogated the common law rule against perpetuities by enacting the uniform statutory rule against perpetuities, the so-called “wait and see period” is measured from the time of the creation of a special or testamentary general power because the use-wrap carries over the common law relation-back theory of special and testamentary general powers.

What this does is it prevents settlors from effectively making an applicable rule against perpetuities, or wait and see period elective, by creating powers of appointment adjunct to nonvested future interests. It was, in fact, Delaware’s complete abrogation of the relation-back for this purpose that caused Congress to enact the so-called Delaware tax trap, Sections 2044(a)(3) and 2514(d) of the Internal Revenue Code.

The idea of special powers relating back to its creation, is also reflected in the second group of cases I mentioned, which stand for the proposition that when a special power is exercised to create a trust that fails under applicable local law, there is a resulting trust to the donor of the power, or the donor’s estate, and not to the donee, or the estate of the donee.

Resulting trusts are the equitable analogs of implied legal reversions. So, a plausible account of these cases is given in terms of the donors being treated as the transferor of the appointed assets because the dispositive agency of the donee, in exercising the power, relates back to the power’s creation by the donor.

So, if, for example, the donee of the testamentary special power, exercises the power to create a testamentary trust that is determined to lack definite, or definitely ascertainable, beneficiaries in a jurisdiction that does not enforce so-called purpose trusts; then, according to this class of cases, the nominated trustee holds the res for the benefit of the donor of the special power or her successors. This prevents the donees inadvertent creation of an unenforceable trust from converting her special power of appointment to a general one.

The choice of law instantiation of the relation-back theory is described in Section 274 of Restatement (Second) Conflict of Laws, according to which the exercise of a power of appointment granted by the terms of a trust relates back, for purposes of determining the validity of the exercise, to the law of the jurisdiction whose law determines the validity of the trust.

If, for example, an inter-vivos trust of movables, that is personalty as opposed to real estate, whose validity is governed by the law of state A, grants the power of appointment to a donee domiciled in different state B, and the donee exercises the power to create a trust that violates the common law rule against accumulation of income. The fact that that common law rule is in full vigor in state A, will mean, according to Section 274, that the exercise is invalid, even if state B has long since abrogated the rule. That is the rule against accumulation of income.

My article is about whether the local law instantiations and the relation-back theory concerning perpetuities and resulting trusts, will allow a court to derive the choice of law instantiation. That is, to arrive at the rule of Section 274 in a case of first impression. Their restatement suggests that they will allow that and that is a consummation devoutly to be which given their instatements conception of choice of law rules. But I have my doubts, about which you can learn more if, as I hope, you read the article. Thank you.

Jim, very interesting. Powers of appointment are always tricky. And in their exercise, the devil is truly in the details. Thanks for educating us on this area and I look forward to reading your article.