Do You Have All the Tools to Deal with Your Client’s IRA Custodian? 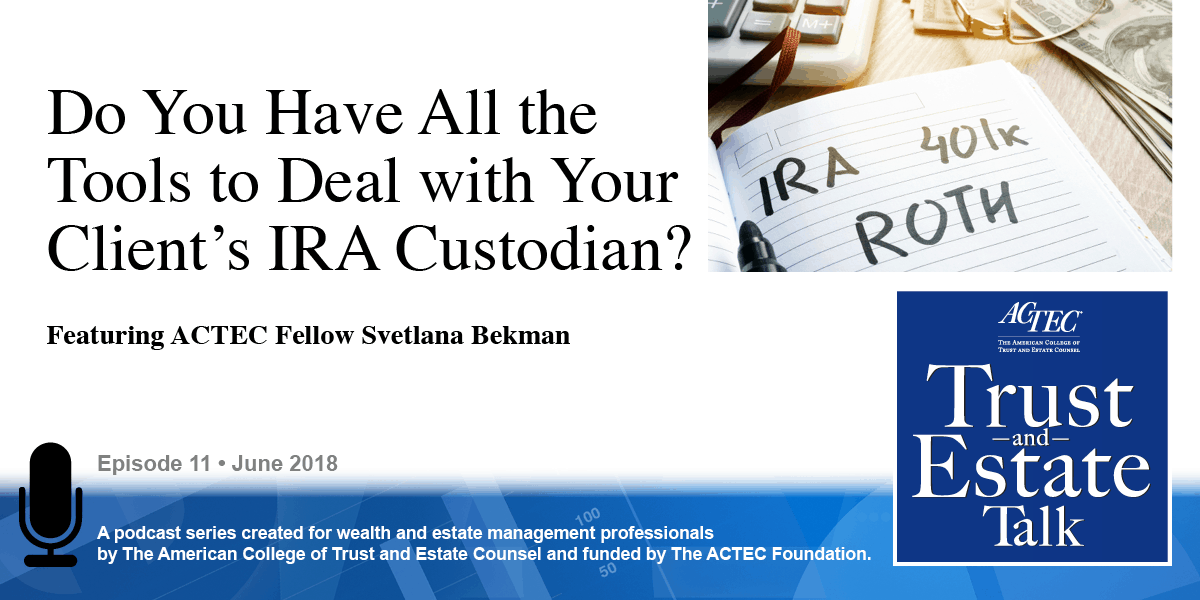 “Do You Have All the Tools to Deal with Your Client’s IRA Custodian?” That’s the subject of today’s ACTEC Trust and Estate Talk.

This is Kevin Matz, ACTEC Fellow from New York City. There are many different kinds of providers for a client’s individual retirement account, or IRA. Wealth planning attorneys frequently work with a client’s IRA provider to accomplish the client’s goals for the IRA. To learn more about this issue, I will be talking today with Svetlana Bekman, ACTEC from Chicago. Welcome, Svetlana. Hi, Kevin.

To start, how does an IRA provider generally work with clients and their attorneys on the beneficiary designation?

And what are the duties that are owed by the IRA custodian to the beneficiaries of an IRA?

What happens after a client dies, and his or her IRA has an ambiguous beneficiary designation?

Well, from the IRA custodian’s perspective, of course, they – it – wants to fulfill the intent of the IRA owner if that intent can be ascertained. And the custodian also wants finality, and this means that if the custodian transfers the inherited IRA assets to, let’s say X, it does not want, or rather it wants to be sure that someone else, let’s say Y, does not later claim the same assets. So the custodian may also be worried about being held responsible for somebody else’s adverse income tax consequences. And how might that happen? Well, let’s say the IRA custodian transfers the inherited IRA to X, but then later the IRS asserts that Y was in fact the designated beneficiary and imposes income taxes and penalties on Y. The custodian’s concern is that in that case, Y may look to the custodian to be made whole. So, assuming that applicable law allows, the ideal solution to this situation is for the custodian and the parties with an interest in the IRA to enter into a private settlement agreement construing the ambiguous beneficiary designation. The agreement should also dispose of the IRA in accordance with the construction and release the IRA custodian from any liability, ideally with all parties having consulted and relying on their own counsel. In some instances, such an agreement may not be possible for some reason, for a number of reasons, and in that case, the only way forward may be a court action construing an ambiguous designation.

And one last question: Sometimes a client is going to want to put non-marketable assets into his or her IRA. Is that a good idea?

Well the client probably thinks so. And, in all likelihood, they don’t have enough liquidity in their taxable account, and this is why they’re asking for this non-marketable asset to be placed in their IRA. And this is a place that I urge everyone to tread very carefully. The client, indeed, should expect that the custodian will put up gates, and these gates are both for legal and practical reasons. So, from a legal perspective, the custodian is concerned that this investment may constitute a prohibited transaction, or PT. A PT is a transaction between the IRA owner or a party related to the IRA owner such as a relative or an entity that’s controlled by them and the IRA. PT results in disastrous tax consequences to the IRA owner, including disqualification of the IRA, excise taxes, deemed distribution of the prohibited investment, and, of course, the IRA custodian wants to help the client avoid stepping on a landmine, but the custodian is not in a position to vet the transaction. The PT, by the way, would also trigger certain reporting obligations for the provider itself. So, to avoid these adverse consequences, the IRA custodian will expect the owner of the account to seek their own tax advice and also to direct the custodian to enter into this transaction. And, in doing so, attest, that upon advice of counsel, this transaction is not a prohibited transaction. The practical considerations that might lead an IRA provider to refuse to accept non-marketable assets include the difficulty of making RMDs when you have an illiquid asset and also, due to having to provide the IRS with accurate valuation, something that the IRA custodian is required to do on an annual basis on form 5498. So, in short, the complexity of administering IRAs with non-marketable assets means that many providers will not accept them, and those that do will do so only as an accommodation to their most valuable and typically biggest clients.

Thank you Svetlana for your IRA provider insights.