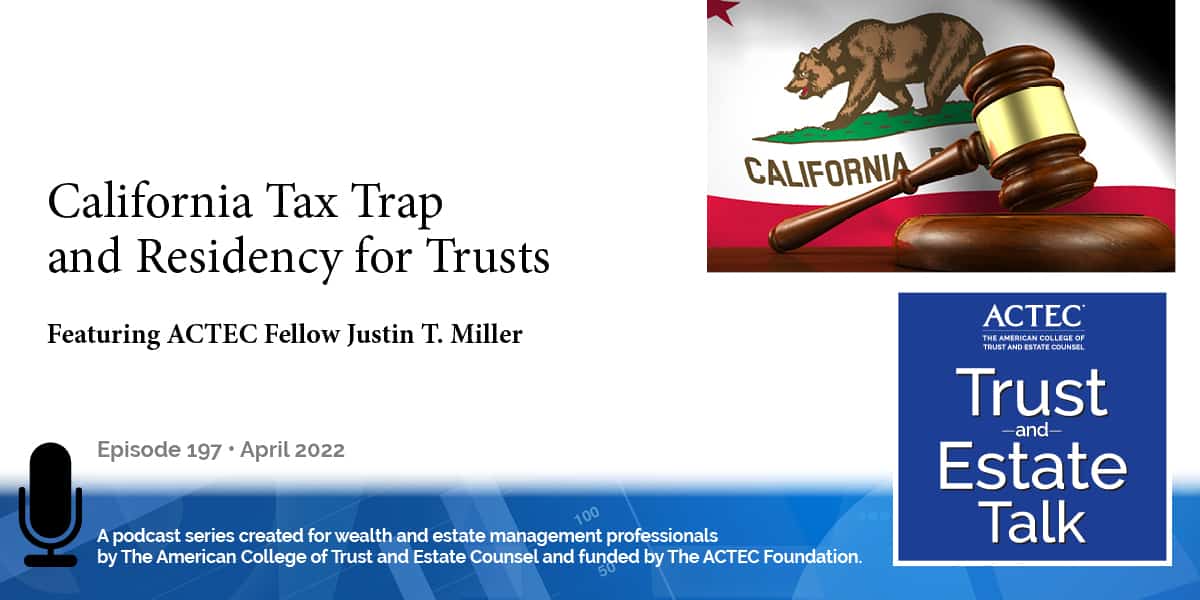 This is Natalie Perry, ACTEC Fellow from Chicago. You might be surprised to learn that if any trustee or beneficiary moves to California the entire trust could be subject to tax in California. Today you will be hearing from ACTEC Fellow Justin Miller of San Francisco, California. Welcome, Justin.

Well thank you, Natalie. I’m going to start actually with a little tongue twister and it goes something like this: you can trust that a non-grantor trust with trust income will be subject to a California trust tax if you put your trust in a California trustee of a trust, regardless of whether the trustee can be trusted. So, try saying that five times fast. And it’s actually somewhat true. The reality is, if you have any kind of not just trustee, but fiduciary, or even potential beneficiary that moves to California, you might be somewhat unpleasantly surprised to learn that you suddenly have a trust that is subject to taxation in California.

But now let’s focus down on trusts. So, two important things, so steps two and three. Step 2, we want to look at where the fiduciaries are. California law doesn’t say trustee. Trustee is certainly a fiduciary, but fiduciary is a much broader term. And unfortunately, that broad term, fiduciary, is not really defined under California law. It’s somewhat of a circular definition. A fiduciary is somebody acting in a fiduciary capacity. So, what does that mean? It’s not entirely clear. Especially when we have trusts that sometimes have these unique positions that are created such as trust protectors, trust advisors, and trust directors. You might even have a trust that specifically says that individual is not acting in a fiduciary capacity, but that’s not enough.

So, a very, very broad term. What about a third-party independent corporate trustee? How do you know if that corporate trustee is a fiduciary in California? And for that, the test is to look at where the major portion of the administration is done. So, if you have a corporate trustee and let’s say we can do it in Delaware or we can do it in California or some other state. We’re going to look at where the administration work is done. Where are you doing the accounting work, the distribution decisions?

Now, the investment management is a little different. If you’re doing some portfolio management work in California, that’s not typically a major portion of administration. There is a 1997 California Chief Council ruling specifically on the topic of whether investment management is enough to be considered a major portion of administration. But if you’re doing your traditional trust officer type work in California, then you could be considered what is a corporate trustee to have a California fiduciary.

California law is different. California uses this term which it doesn’t define very well: non-contingent beneficiary. So, if you really have a vested beneficiary, someone who’s getting money, someone who’s entitled to money, that could also subject a trust to tax in California. Now, you might say well, what if we have a trust set up in a state like Delaware, Nevada, or Wyoming, or South Dakota, or Alaska? And it’s accumulating income for 20 years? So, nobody’s getting anything in California, they’re completely contingent. And then in year 20, we make a big distribution. We distribute out $2,000,000. California also has what’s called a throwback tax.

How to Determine California Fiduciaries and Non-Contingent Beneficiaries

Now, what about sort of a safe harbor? This is the problem with people that like to do their own research, their own tax research. I get this question all the time, especially people – there’s a website you might be familiar with called Google. And people go on Google, they do their own tax research, they read some materials and they read about this nine-month rule. And they say, “Wait a minute. I read in California, aren’t I safe if I’m not subject to this nine-month rule?” And they think that, oh, as long as I spend less than nine months in California, I won’t be a resident.

So, in general, if you’re domiciled in California, you will be considered a California resident. The other thing is California- I talked about the throwback tax earlier- sometimes what you might see is a beneficiary saying, “Oh, well we’ve got this trust in Delaware, Nevada, or some other state that it’s been accumulating income for many, many years. Why don’t I just leave California before I get that big distribution, so I won’t be subject to the throwback tax?”

So, the way it works in California is whether the Franchise Tax Board (FTB) or it goes to court, how’s the court going to determine that residency or domicile? And in California, it comes down to facts and circumstances. This goes all the way back to the Bragg case. It’s the appeal of Bragg, B-R-A-G-G. And there are a bunch of factors that the FTB and the courts will look to consider whether or not California is your place of residence or domicile. And these factors, now none of these factors, it’s not an exclusive list of factors and it’s not just the number of ties. It’s also the strength of your ties to California. And there’ll be things like how much time do you spend in California versus all the other places where you might spend time?

So, if you spend most of your time in California and the rest of the time, you’re spending in all your homes or traveling around the world, you could still be a California resident. California looks at where your driver’s license is, and where your vehicles are registered. Where your professional licenses are located, where you’re registered to vote. Your social ties even, what churches, synagogues, clubs you belong to. So, those are just a list of factors, but as I said, it’s not an exclusive list and it’s not just the number of factors. We’re going to look at the strength of each of those ties. And some factors matter more than others.

So, I’m going to leave you with the one that we see most of the time and that the courts and Franchise Tax Board really seem to focus in on. And that is going to be things like your principal residence. So, let’s put it this way, if you’ve got a huge home in California, or let’s just say a very expensive home. Let’s just say you have a $4,000,000 house in the San Francisco Bay area. Which by the way, for people not from California, a $4,000,000 house in the Bay area could be 2,200 square feet. So, it might not even be a huge home, but let’s just say you have a $4,000,000 house in California. That’s your residence and you’re trying to claim that you’re leaving California and you get a small condo somewhere, you’re renting an apartment somewhere. And all of your furniture is still in California, you still come back to California. In theory that could be a very, very bad fact for you to claim you’re not a California resident. Because you’ve kept your primary home, you keep coming back to visit, you’re not renting it out. And the other place that you purchased in the other state is not up to the same level. It doesn’t necessarily have to be the same cost. Don’t get me wrong, a $4,000,000 home in California, you could probably get a home twice as nice in other parts of the country for half the money.

So, it’s not just the cost of the home, but it’s the quality of the home. And that’s a real important factor to determine whether or not you’ve changed your residence or domicile.

And I’ll leave you with the last thing, and that is: how does the California Franchise Tax Board, how do they even figure out these factors? This is a facts and circumstances test. And the reality is the California Franchise Tax Board will do whatever they can to figure out those facts. They can interview neighbors, they can fly drones over your home, they can go through trash cans. Whatever it is, if you’re in a situation and trying to establish that you’ve officially left California, you better make sure you have the facts and circumstances in your favor.

And ultimately what it comes down to, and I’ll just repeat, even if you’re not in California and you think that you’ve drafted the perfect trust for a grantor who’s not in California. That trust could eventually be subject to California (tax) and we’ve got to look at where the fiduciaries are and where the non-contingent beneficiaries are. And that is just the rule for non-grantor trusts.

I hope this helps you and with that, thank you for your time today. And I will turn it back over to Natalie.

Thank you, Justin, for educating us on this unique provision of California law.