2018’s Priority Guidance Plan from the IRS and Treasury 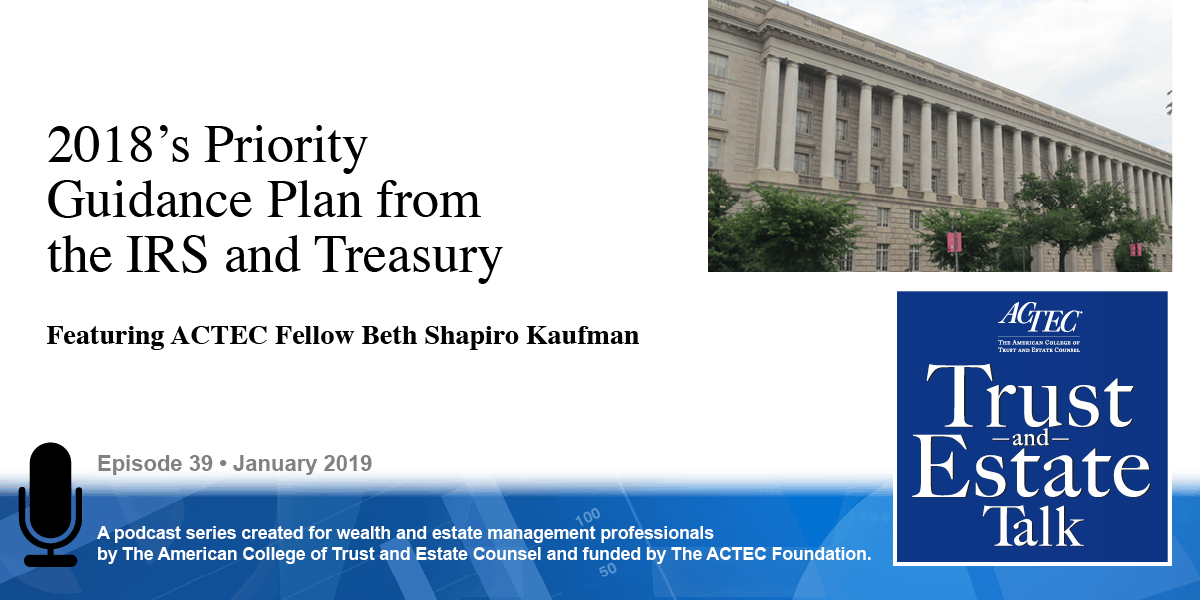 “This Year’s Priority Guidance Plan from the IRS and Treasury.” That’s the subject of today’s ACTEC Trust and Estate Talk.

This is Susan Snyder, ACTEC Fellow from Chicago. Every year the IRS and Treasury release a Priority Guidance Plan. To discuss this year’s plan, you’ll be hearing today from ACTEC Fellow Beth Shapiro Kaufman of Washington, DC. Welcome Beth.

So, this Priority Guidance Plan, it lists issues and projects the IRS and Treasury intend to work on during the year. How do they go about identifying the projects that go on that list?

Projects for the Priority Guidance Plan come from a variety of sources, recently we’ve had a lot of need for guidance stemming from the 2017 Tax Act and the IRS has been hard at work on those projects. The IRS also asks each year for suggestions from the public. There’s a notice that comes out every spring asking for input and groups, such as ACTEC, respond with suggestions. (ACTEC’s comments on proposed regulations under Sections 199A and 643(f)) But you don’t have to be a group to respond, anybody can send in ideas for areas in which they think guidance would be useful.

Another area that the IRS likes to issue guidance in would be an area in where it would cut down on their need to issue private letter rulings. So, for example, the IRS found they were issuing a lot of rulings on portability and then issued revenue procedure 2017-34 so that people could follow that revenue procedure instead of coming in for rulings, thus freeing up their resources to do other things.

Finally, some suggestions bubble up from inside the IRS, including from those lawyers that litigate cases for the IRS on issues they think need guidance. The IRS studies all of these suggestions because they’ve got limited resources, they need to set priorities. They like to focus on projects that they can finish during the fiscal year, which tends to limit both the number of projects and the scope of projects. They like to focus on issues that will have a broad impact and help a lot of people. And, they like projects that reduce the burden on the IRS. Just because a project doesn’t make it onto the Priority Guidance Plan doesn’t mean that nobody’s working on it, it might be something that’s a lower priority but still being worked on as time allows or it might be a long term project that they realize can’t be done during the plan year and therefore they’re working on it but it won’t show up on the plan until it’s closer to done.

What types of projects are on the Priority Guidance Plan right now? Well the IRS hasn’t issued an updated plan for the 2018-19 fiscal year (2018-2019 Priority Guidance Plan released November 8, 2018 after podcast recording) but I would expect it to look a lot like the plan for the fiscal year that just ended. The top priority right now is to get guidance out relating to the 2017 Tax Act. In our area what that means is guidance on what we call the clawback (commentary on Proposed “Anti-Clawback” Regulations). That’s the concern about what happens to a person’s exemption in 2026 if the exemption level actually does go down, we’re expecting guidance on that and probably fairly soon.

Their next priority is what they call burden reduction. And last year’s Priority Guidance Plan listed two projects in this area related to estate and gift matters. Those were the finalization of the basis consistency regulations under Section 1014 and finalization of the relief for mistakes in GST elections under 2642(g).

In what way are those projects burden reducing? Well, that’s a good question, it’s a little hard to view those projects as burden reducing unless you take the view that it’s going to reduce the burden from what they proposed in the proposed regulations. For example, in the proposed regulations under Section 1014 there were some pretty burdensome rules, like the due date 30 days after the estate tax return, the zero basis rule, the reporting of successive transfers. And likewise, the proposed regulations under Section 2642(g) impose more stringent requirements for relief than the requirements that are generally imposed under Section 9100. So my guess is that, because they’ve characterized these as burden reducing, what we’re going to see it the final regulations is that some of those burdens are going to be eliminated.

So what else is on the Priority Guidance Plan? There are only three other projects on last year’s plan in the estate and gift area and none of those were completed so I think we’ll see those come back onto the plan again. Those are guidance on the basis of grantor trust assets at death under Section 1014, final regulations under Section 2032A regarding imposition of restrictions on estate assets during the alternate valuation period, and guidance under Section 2053 regarding personal guarantees and the application of present value concepts in determining the deductible amount of expenses and claims against the estate. I think all of those three projects will be on the Priority Guidance Plan for the upcoming fiscal year. And, I’d actually be surprised to see the addition to any new ones.

So thank you for breaking down, Beth, the Priority Guidance Plan and demystifying it for our listeners.